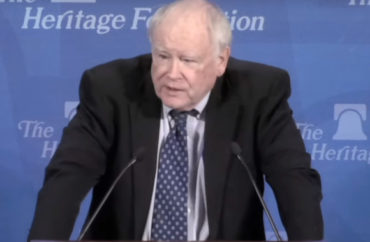 ‘Higher ed is damnably inefficient and costly, and the government has screwed it up’

For six decades, Dr. Richard Vedder has been observing the politics and economics of higher education in America. A professor of economics at Ohio University and Senior Fellow at the Independent Institute, Vedder has frequently examined the role of government in forcing tuition upward and has offered common-sense recommendations on how to make America’s universities more cost-efficient.

In his new book, “Restoring the Promise: Higher Education in America,” Vedder provides statistically backed remedies for what ails the nation’s colleges and universities. In all, Vedder offers more than a dozen ways to improve higher ed funding, including ending or dramatically revising the federal student aid program, allowing students to earn a degree by taking courses from different universities concurrently, increasing faculty teaching loads, and instituting year-round campuses so students can graduate in three years.

The College Fix recently talked with Vedder about his book and how he thinks we can make American universities great again.

THE COLLEGE FIX:  In reading your book, you cover a wide-ranging scope of topics. If you could enact one recommendation from the book, what would it be?

RICHARD VEDDER: When I started writing on higher ed, my focus was on costs. Higher ed is damnably inefficient and costly, and the government has screwed it up.

I don’t think it was a deliberate effort to screw up higher ed, but I think that is the effect. It has raised its cost enormously, no question about that. It has diluted its quality – a more debatable proposition, I’ll grant you. But it has caused problems – high dropout rate, kids going to college that don’t belong, which has added a third problem, the underemployment problem. 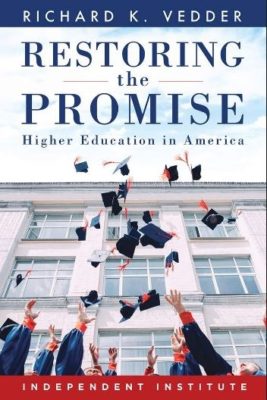 I also think kids aren’t learning a hell of a lot these days, and grade inflation and a whole bunch of things explain that, but all of it goes back, at least in part, to the role of the government. If I were writing the book 40 years ago, I would have emphasized the role of state and local government sins – today I focus on federal government sins more. But there’s stuff the states could do differently that would improve university education, I think. There are a whole bunch of things the federal government could do.

I think, for example, the creation of a federal department of education was a mistake. And I think higher ed is worse off because of that. I think my book documents some of the areas where the empirical evidence supports that.

So the kids are not learning as much, they’re paying more to learn less – so they’re getting less for more. And then, as a consequence of too many kids going to traditional college, we have this underemployment problem where college kids – because it’s a tight labor market right now – for all the money going into educating them, there’s not much of a vocational result.

Which would be alright if colleges were doing other things that served society well. For example, if there was a rise in virtue, a decline in crime, or if we could attribute to college some great improvement in civic responsibilities and people behaving better and so forth. This is what colleges were originally supposed to do, but I don’t see any of those things happening. Indeed, I’m starting to see a contempt for certain basic principles – things like freedom of speech, the notion that colleges are places where you should be challenged and face uncomfortable thoughts as part of the learning process. That’s going by the wayside.

One of the advantages I have is that I’ve been around for so friggin’ long. I was around even in the late 1950’s. So I have seen higher ed evolve over a long period of time. I love colleges and universities – I went to Northwestern’s Medill School of Journalism and said, “shit, I don’t want to give this up, I’m having fun.” So I’m still doing it, 60 years later.

CF: In reading the book, it’s very topical in that it criticizes “free college” plans that some Democratic presidential candidates like Elizabeth Warren are throwing out there. Why is “free college” a bad idea?

RV: Let’s, for a moment, do a little thought exercise. Let’s agree with Elizabeth Warren that we’re going to have free college. Students don’t have to pay tuition. How are the colleges going to pay the bills? Are we going to say they federal government should pay whatever tuition the colleges want? Can’t do that, colleges would raise their fees like crazy.

Are you going to say, college fees are forever frozen at their current level? So there are a lot of practical difficulties before you even get to how you’re going to pay for it. Tuition revenue at almost every school – a few of the rich Ivies may be an exception – provides a very large portion of the income at those schools. Even the public “Ivies” depend more on tuition than they do state appropriations these days.

But I start out looking at it from a more philosophic point of view. And that is, who benefits from college? The main beneficiary of a college education are the people going to college. The notion that there are these sort-of externalities or spill-over effects – that somehow, if you go to college that the people around you will become better or more productive people – is a nice idea, but there’s relatively little evidence to support it.

In fact, there’s some argument it might actually go in the opposite direction – that colleges have become a disruptive force in American society. But the argument in favor of public support for universities typically boil down to a couple things: First, the externality argument that colleges make for better people, college graduates commit fewer crimes, they work for Habitat for Humanity and the Red Cross, they serve society more…

CF: You mention in the book that they smoke less…

So the role of college, of having this “positive spillover” effect, is grossly over-exaggerated.

CF: I actually had that question written down for you. The proponents of universal college argue that a degree somehow suddenly sprinkles knowledge on these students and imbues them with all these characteristics, and they point to statistics showing that people holding college degrees make so much more money than non-degree holders. In fact, it’s probably the people who are already smart, driven, and disciplined, and who would go on to make a higher income anyway.

RV: Exactly. This actually gets into the economics of higher ed. And that is, higher ed is first and foremost a screening device. It is a way that employers can discern who the hardest working, more disciplined, more responsible, and yes, brightest people in society are. The people who go to college, by and large, have higher IQs, they have lower levels of alcoholism and drug addiction, they commit fewer crimes – all of these marvelous things – not because they went to college, but because they’re good kids to begin with.

Being in college may contribute a little to that. There are some networking effects with other good kids that lead you to have better behavior, maybe. But, by and large, college contributes very little to the productivity of people in the sense of making them better-equipped for work. There are a few fields that are exceptions, engineering as an example, or accounting. Most learning in life comes on the job anyway. By and large, colleges offer little human capital formation.

Then, of course there’s the other argument, the egalitarian argument – that, to get ahead in America, you have to have an education, and education is costly, therefore, we have allow people of limited means to get ahead to achieve the American dream.

Then you look at the statistics. Ever since we’ve been sending everyone to college, the statistics show income inequality has grown rather than narrowed. In other words, there’s more income inequality today, not because we’re richer, but partly because college has aggravated the problem. It certainly has not done anything to make the poor more able to go to college – in fact, I think the most interesting statistic in all of higher ed is that the proportion of recent college graduates coming from the, let’s say, bottom one-quarter of the income distribution, is lower today than it was in 1970, which is when we started all these government loan programs.

So the loan programs have actually worsened things for poor people. And the beneficiaries have been the universities.

CF: Any time you hear the left talking about “college affordability,” it never means “keeping tuition low,” it always means more federal loans for students, more state aid for universities, and the like. Just so everyone at the universities can keep wetting their beaks at the taxpayers’ expense.

RV: The cost of universities has no doubt been pushed up by government action, typically the federal government. Bill Bennett hit it right on the head in 1987 when he said the federal financial assistance programs are an open invitation for universities to raise tuition fees, and that’s what they’re doing. And the prime beneficiaries of those programs have been, not the students, but, rather, the universities themselves.

So the faculty are living a little better than if we didn’t have those programs and the administrators are living a lot better – and we have many, many more of them. We have created an academic arms race that is highly inefficient, highly costly. And it’s lowering the quality of education because we’re crowding out academics so we can go to sessions and learn to be more diverse and inclusive and all these sorts of things.

CF: What do you think is the effect of political correctness on campus?

RV: The less important effect is that it raises the cost. Everything we do in higher ed that is not related to teaching or doing legitimate research is just a cost enhancement.

But that’s a secondary effect. I have actually seen this in my own life – people are afraid to say what they think. We’re dying out – there are fewer people willing to speak frankly. …