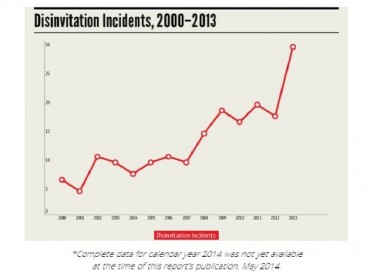 Universities have experienced a dramatic spike in the rate at which campus guest lecture and commencement speaker invitations are jettisoned because some students and faculty don’t like what the speakers have said or done in the past.

The Foundation for Individual Rights in Education on Wednesday released a report which found that since 2000, there have been at least 192 reports of disinvitation incidents involving campus speakers, including campus speeches, commencement ceremonies, and other events.

“The data demonstrates an upward trend in the frequency of disinvitation attempts, with a sharp rise beginning in 2007 and peaking in 2013 with 29 incidents,” FIRE stated. Nevermind open dialogue and tolerance for other viewpoints – all that idealism is tossed out like yesterday’s garbage when some students and professors don’t like the speakers or topics.

What’s more, administrators – and all too often the invited speakers themselves – kowtow to the pressure, either disinviting the guest or bowing out of the honor.

The trend, says FIRE President Greg Lukianoff, is happening because colleges are more willing now than ever to turn their backs on speakers.

Others also blame the Millennial culture for the trend.

In a world where college students demand “trigger warnings” before professors cover possibly upsetting material; where the word “selfies” was added to the dictionary because young people can’t stop taking pictures of themselves and posting them on the Internet; where viewpoint discrimination runs rampant on college campuses so students don’t have to hear opposing ideas – that is the world that has fostered this latest and disturbing trend, they argue.

Even Millennials have begun to recognize it among their own peers.

In a column headlined “The Oh-So-Fragile Class of 2014 Needs to STFU And Listen to Some New Ideas” – Daily Beast political reporter Olivia Nuzzi writes “another powerful woman has been discouraged from speaking on campus. Because God forbid my fellow, fragile millennials have their ears damaged by words with which they don’t agree … young people are the worst.” Often, they can be. But so can the older generation that coddles and allows it – and even encourages it to a certain extent.

Consider the recent history of commencement speech disinvites – which run the gamut against conservatives, liberals, accomplished women, artists and more.

In 2013, Ben Carson, who is a Christian conservative and a neurosurgeon, had to withdraw his invitation to speak at John Hopkins University after he said neither gays nor bestiality proponents have the right to redefine marriage. Carson told Fox News he withdrew because he did not want to “distract from the celebratory nature of the day.”

Again in 2013, President Obama supporter Rev. Kevin Johnson was asked to withdraw as baccalaureate speaker at his alma mater, Morehouse College, because of an editorial he wrote for the Philly Tribune that was critical of President Obama’s inattention of the plight of black people. Rev. Johnson’s editorial is titled “A president of Everyone, Except Black People.”

In 2011, the trustees at the City University of New York voted to retract an honorary degree that one of its campuses, John Jay College, awarded to Tony Kushner, the Pulitzer Prize-winning playwright of “Angels in America.” CUNY Trustee Jeffrey Wiesenfeld claimed Kushner held deeply anti-Israel views. Wiesenfeld made the allegations during a board trustee board meeting, which set in motion a vote by the trustees to shelve the honor. Kushner said Wiesenfeld distorted his views, but it was too late.

In 2008, Karl Rove, the architect behind former President Bush’s campaign for the White Office, accepted an invitation to speak at the college-prep Choate Rosemary Hall – an elite boarding school known for its politically liberal bent. But when Choate students threatened to walk out of the commencement address, school administrators decided to disinvite Rove.

The tradition has carried on in 2014. At Rutgers University, students and professors protested former Secretary of State Condoleezza Rice’s involvement in the war on terror, which prompted her to bow out of the commencement speech.

Author and women’s rights activist, Ayaan Hirsi Ali, was offered an honorary degree from Brandies University and invited to give the commencement address at the school’s graduations ceremony commencement. Her invitation was rescinded after she received scathing criticism from the student body for reportedly saying, “Islam is the new fascism.” Ali’s animosity to Islamic fundamentalism was formed while she was living in Somalia. To wit, Ali’s father was opposed to female genital mutilation, but while he was imprisoned, Ali’s grandmother had the traditional Islamic procedure performed on Ali.

Another powerful and accomplished woman, Christine Lagarde, the International Monetary Fund’s managing director, stepped down as the commencement speaker at Smith College after more than 500 petitions were signed by Smith College students asking the college to rescind her invitation. The petition claimed Lagarde’s work “directly contributes to many of the systems that we are taught to fight against.”

And lastly, former University of California, Berkeley Chancellor Robert Birgeneau pulled out of a Haverford commencement address over criticism of his university police’s use of batons and pepper spray on Occupy Cal demonstrators. Ironically, Birgeneau supported a Berkeley rally against economic equality and the Occupy Cal movement that it birthed. He even wrote an email sympathetic to Occupiers concerns “about the extreme concentration of wealth in US society and the steady disinvestment in public higher education by California and other States.”

But still, the irony was not enough to keep Haverford from railing against him.

FIRE’s Lukianoff warns student protesters and college administrators that freedom of speech is more than just the right to protest a speaker on a college campus.

“Freedom of speech does include some of these old fashioned ideas, like let’s hear someone else out, let’s see if someone has something interesting to say, let’s not prejudge it.”

Essentially, Millennials – sit down, and listen for a second. You guys might learn something, or maybe you won’t.

In the end, all that matters is that all sides are heard. Let uncomfortable views and opinions wander around the market place of ideas. Let the weak cheese viewpoints get pummeled by strong and reasonable views. If the speaker makes objectionable claims during a commencement speech, use a counter event to expose the speaker’s ignorance, but please, for the sake of tolerance, let the person speak.