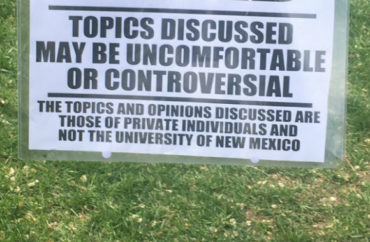 But may still make you more anxious over time

Are trigger warnings in the classroom helping students better deal with troubling topics in the curriculum? No.

Are they making students even more sensitive and unable to deal with everyday life? Also no.

According to new research published in Clinical Psychological Science, the approximate effect of trigger warnings, at least in the short term, is ¯\_(ツ)_/¯.

A press release by the Association for Psychological Science, which publishes the journal, says the researchers ran six experiments on nearly 1,400 participants, a mix of college students and online participants.

“This is the first piece of empirical work directly examining if [trigger warnings] have their intended effects,” said lead author Mevagh Sanson of the University of Waikato. She was joined by Waikato colleague Maryanne Garry and Deryn Strange in the John Jay College of Criminal Justice.

Participants were either shown a trigger warning ahead of video that “may contain graphic footage of a fatal car crash,” or shown the video without any warning. The same experiment was repeated in a text story rather than video.

They had similar responses regardless of seeing the warning or not, viewing video versus reading text, or even their backgrounds. Warnings had “little effect”:

Could it be that trigger warnings are specifically effective for those people who have previously experienced traumatic events? The data suggested the answer is no: There was little difference between groups. In other words, individuals with a personal history of trauma who received a trigger warning reported similar levels of distress as did those who did not receive a warning.

It will take further research to determine if trigger warnings have a stronger effect on people with clinically diagnosed disorders such as PTSD, the initial justification for using trigger warnings in the classroom.

Sanson, the lead researcher, also warned against viewing the study as proving that trigger warnings are “benign” and thus safe to use as a long-term educational practice:

We need to consider the idea that their repeated use encourages people to avoid negative material, and we already know that avoidance helps to maintain disorders such as PTSD. Trigger warnings might also communicate to people that they’re fragile, and coax them to interpret ordinary emotional responses as extraordinary signals of danger.

The findings differ from a study last year by Harvard University psychologists that found trigger warnings make people feel more vulnerable and anxious. That study, however, used “classic literature” as the source material, rather than a mix of video and text; excluded victims of trauma; and had far fewer participants, about 300.

Read the release and abstract.