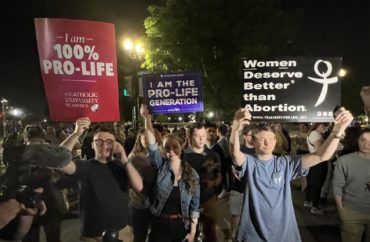 Pro-life students from the Catholic University of America gathered last night outside of the Supreme Court as rumors spread of a potential reversal of Roe v. Wade when it rules on Dobbs v. Jackson. The pending case involves Mississippi’s prohibition on abortions at fifteen weeks.

Students with CUA Young Americans for Freedom can be seen and heard praying a Hail Mary and holding rosary beads. Pro-life and pro-choice activists rallied outside the court.

The young men and women pray as pro-choice activists wave signs in their faces.

“Holy Mary, Mother of God, pray for us sinners,” the students can be heard saying.

You can try to cover my sign, but you cannot silence our message https://t.co/TglHOa6HKf

A CUA student told The College Fix via Twitter why it was important to be there.

“We as Catholic University students felt it was important that we go to the court last night because now more than ever the American people will be thinking about where they specifically stand on abortion,” Catriona Fee, the YAF chapter president, told The Fix on Tuesday morning.

“The potential overturning of Roe and Casey brings the issue of protection for the unborn back to the states,” Fee said. “This opens up the question that the American people have been so hesitant to answer for the past fifty years of, when does life begin?”

She said that “more than ever…young pro-lifers must speak up.”

“The mainstream media is more than happy to keep the pro-life generation out of their reporting, but being in front of the court last night was one small way to prevent that,” she said. “This morning when millions of Americans open news apps to read about what happened last night, they’ll see videos and photos of CUA students silently praying the Rosary and holding prolife signs, while the other side screamed in our face.”