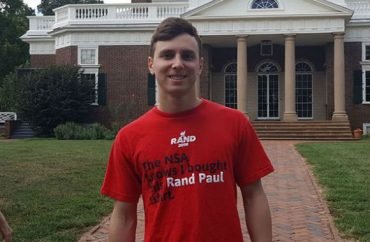 ‘My termination was a politically motivated move’

The Rutgers University student who hosted anti-feminist provocateur Milo Yiannopoulos for his first U.S. college event says the student newspaper fired him Monday because of his conservative views.

Aviv Khavich published his final column for The Daily Targum Sunday night, arguing that immigration enforcement is not “anti-immigrant.”

He spoke as an immigrant himself, born in Israel after his Ashkenazi Jewish parents fled Belarus in the wake of the Soviet Union’s collapse.

But the trigger for the firing may have been Khavich’s demand that his column include the phrase “illegal aliens” to describe those in the country illegally.

It was the final straw for the Daily’s editor, who said Khavich repeatedly fought over “stylistic” editing changes to his columns over the past several months.

Khavich has written six pieces for the Daily, four since joining as a columnist. His first defended Yiannopoulos’s speech as protected by the First Amendment, saying that “offensive speech … needs the most protection.”

But two of his last three were about immigration. Khavich opposes accepting Syrian refugees into America as a security threat, and his final column Sunday said flatly: “Justice is mass deportation. Justice is respecting my [legal immigrant] family and millions of others like us.”

Khavich told The College Fix in a phone interview that “every instance of ‘illegal alien’ I wrote was changed to ‘undocumented immigrant’” by his editors. “But I considered it a part of my opinion to not use” the latter term, which he finds “politically correct and also inaccurate.”

When Khavich complained to his editor about the edited draft, she said the “illegal” edit came from the top: Editor in Chief Dan Corey wanted the column to follow Associated Press Style.

The AP Stylebook was revised three years ago to disapprove of using “illegal” to describe a person, as opposed to an action, after having affirmed “illegal immigrant” just a year earlier.

But AP Style also frowns upon “undocumented” – the term used in Khavich’s published column – because the term is “not precise.” Khavich notes that federal law uses the term “alien.”

His editor was “not happy” after being confronted, Khavich said, and he was fired the next day.

“I can only arrive at the conclusion, as any reasonable person would, that my termination was a politically motivated move itself,” Khavich wrote in The Tab the day after his firing. He blamed Dan Corey by name and called the Daily “very bias indeed”:

a collection of self-flagellating, bureaucratic leftists that only include the three (now two) conservatives that they do as a way to fill the minimum requirements to be considered “open-minded.”

Khavich’s firing not only stemmed from his published conservative views, according to Khavich, but also an earlier incident in which he criticized a Daily news story about sexual-assault reports at Rutgers.

The real reason was that Khavich “continuously took issue with small edits to his columns that were either for stylistic purposes, or for the purpose of fitting his column into the print edition of The Daily Targum,” Corey said.

#Rutgers student Dan Corey of @Daily_Targum got his interview with @POTUS. What did they talk about? #RU250Grad https://t.co/LCkyFHW9Ib

The fights over column wording weren’t the only reason cited by Corey in the termination letter he sent Khavich, who posted it in his Tab column.

Corey cites Khavich’s “previous attempt to disparage the Targum’s name publicly” as grounds for termination, in addition to Khavich’s “overt lack of respect for the editorial staff” and “multiple instances in which you badgered” the opinions editor.

This alleged public disparagement, according to Khavich, referred to his comment on a Daily news article with the headline “Rutgers sees increase in reported sexual assaults.” Khavich’s comment said the headline was “disingenuous” and an example of “scare tactics.” A change of rationale

Corey did not address the public-disparagement claim with The Fix, instead citing his termination letter’s language that Khavich’s firing “was brought about by behavior that would not be tolerated in any organization.”

The editor in chief explained that “illegal” was changed to “undocumented” for “stylistic purposes.” He then claimed that “The Targum does not have a political tone, let alone one that the paper would like to convey by any means.”

Watch what University students had to say about immigration after a march down College Avenue. https://t.co/qUZYrhgMpe pic.twitter.com/n1eJzFGenR

In contrast to his earlier reference to AP Style, Corey told The Fix that the Daily “seeks to emulate the copy-editing practices of professional outlets such as The Chicago Tribune, USA Today and The Los Angeles Times.

“The phrase ‘undocumented immigrant’ is currently preferred by these three, along with many more professional news organizations.”

Khavich disagrees and believes the Daily was just looking for a reason to fire him for political purposes.

“At the slightest questioning of their ‘unbiased editing,’ they jump at the excuse to rid themselves of someone who has been challenging their narrative,” he wrote in The Tab.

“I was writing articles that very strongly challenged narratives,” he told The Fix. “I am sure that it was a termination was based on political bias.”