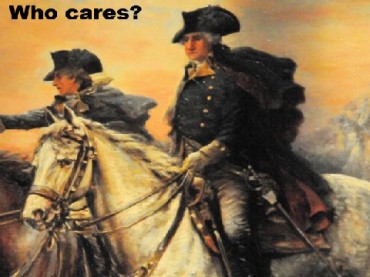 History scholars this week defended controversial revisions to the Advanced Placement U.S. History curriculum’s framework and dismissed conservatives’ concerns over the changes, saying that just because a subject is not listed in the framework does not mean it will not or should not be taught.

David Kennedy, professor emeritus of history at Stanford University and co-author of The American Pageant, a widely used textbook for Advanced Placement U.S. History classes nationwide, told The College Fix this week that teachers have autonomy inside their classrooms.

“There’s nothing in the document that says ‘don’t you dare mention Benjamin Franklin,’” he said.

He also added there is “zero political or ideological coloration” in the framework.

“I don’t know what’s got these people so agitated,” Kennedy said.

“The document is not a curriculum,” he continued. “It is a framework. It’s not meant to specify what’s taught and what’s not taught.”

Kennedy’s comments came at the same time as an open letter was published in Education Week by the authors of the framework, who outlined their opposition to the “recent uninformed criticisms … .”

“Because countless states, districts, and schools have their own standards for U.S. history teaching, we did not want to usurp local control by prescribing a detailed national curriculum of people, places, and events,” the letter reads.

They assert they did not create a full curriculum, rather simply a framework, in order to give teachers more flexibility to “populate the course with content that is meaningful to them and that satisfies their state mandates.”

But the College Board’s new framework for the AP U.S. History courses remains under fire by many respected conservative scholars and activists, who say the revisions largely ignore the Founding Fathers and the heroics of World War II, among many other complaints.

Kennedy told The College Fix on Monday that the concerns are unwarranted, calling the criticisms “a replay of the controversy of 20 years ago over the national history standards,” and asserting critics of the new framework haven’t “read the document carefully.”

While Kennedy was involved in the “first round” of the revisions – the “redesign commission,” which began in 2006 – he did not contribute to writing the newly released framework. That work, he said, was done by the “curriculum development and assessment committee.”

The incentive to alter the framework, Kennedy said, came from a desire on the part of teachers to streamline the subject matter, which had “grown so large as historians expanded the range of topics considered to be important.”

“It was becoming difficult, if not impossible, to cover all the groundwork in one academic year,” he said.

The original goal of the redesign commission was to “make the course more teachable and more intellectually accessible to students,” he said.

Larry Krieger, a former AP U.S. History teacher who has voiced major concerns with the new framework, told The College Fix he is surprised that Kennedy is not alarmed by the changes.

“Pageant has always been a very moderate middle of the road text,” Krieger said. “So it is very odd that Kennedy would be on board with the leftist bias of the new framework.”

Krieger, along with Jane Robbins, a senior fellow at the American Principles Project, detailed some of the problematic subjects within the new framework in a joint letter.

“The new Framework inculcates a consistently negative view of the nation’s part,” Robbins and Krieger write, noting chapters on colonial America focus on the development of a “rigid racial hierarchy” and a “strong belief in British racial and cultural superiority.”

This, they argue, “ignores the United States’ founding principles and their influence in inspiring the spread of democracy and galvanizing the movement to abolish slavery.”

In addition, teachers will be required to focus more on specific conflicts between the colonists and Native Americans, rather than discuss the “rise of religious toleration, the development of democratic institutions, and the emergence of a society that included a rich mix of ethnic groups,” they write.

Perhaps most alarming to the conservative activists is that the new framework erases American “giants” such as Benjamin Franklin, James Madison, and other founders, they added, noting George Washington’s contributions are “reduced to a brief sentence noting his Farewell Address.”

Teachers understand ‘the need to teach them’

Members of the curriculum development and reassessment committee, in their open letter, say that the criticisms of Krieger and Robbins reflect either a “misunderstanding of U.S. history or a very limited faith in history teachers’ command of their subject matter.”

For example, they say it is not necessary to identify Martin Luther King, Jr. as a post-war civil rights activist, based on feedback they received from AP teachers.

“Any United States History course would of course include King as well as most other major figures such as Benjamin Franklin and Dwight Eisenhower,” the letter reads.

They say these names were not even in the previous framework, simply because teachers had “always understood the need to teach them.”

They say the critics are misguided for believing these names to be “omitted” from the course altogether.

“We look forward to the end of this controversy,” the letter concludes, “so that AP students and teachers can return to the vital task of deeply engaging with the major individuals, developments, and ideas that have guided our nation through its history.”

Kennedy said the first redesign commission had talked about “chronological segmentation” in American history, adding this was the motivation for some of the changes seen today. They settled on nine periods of American history.

“The more difficult task was to specify topical themes we thought were important to cover,” Kennedy said.

This is where the controversy was among the members of the redesign commission, since each had different ideas of what “topical themes” were most notable – including more modern items such as “environmental history” and “women’s history.”

But the redesign commission ended its project in 2007. They then drafted a report that was received by the next party to work on writing the framework itself – the curriculum development and assessment committee – of which he was not a part.

“Our project was shut down and I heard nothing about it for years,” Kennedy said. “We did our work and the other body took over.”

He said some people “carried over” to the next commission, “but most did not.”

It re-surfaced a few years later, but his engagement officially ended about seven years ago, once he believed the project to be shut down.

“I thought it maybe just died,” he said. “A couple years later, I heard people were working on it again.” This, he says, was about when the curriculum development and reassessment committee was starting its work.