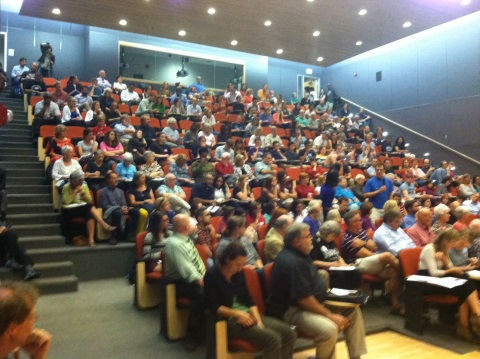 That’s just a sample of some of the vitriol spewed Thursday night at the University of North Carolina – Chapel Hill, which played host to a meeting of Scholars’ for North Carolina’s Future, a group of secular-progressive college professors who have helped lead, along with the NAACP and AFL-CIO, weekly “Moral Monday” protests at the state capitol over the last several months.

The Moral Monday movement is a massive and disruptive weekly civil disobedience demonstration, and it has become somewhat of a spectacle in North Carolina, with liberal activists using it as a platform to rally against the Republican-held majority in the General Assembly and its approval of issues such as voter-ID laws and fiscal responsibility on public education.

The panel was billed around campus as a chance to learn what Moral Mondays are really all about, and see how they “fit in with past social movements.” Before the panel at the Global Education Center at UNC Chapel Hill began, many in the audience of about 165 people discussed their experiences during protests at the Raleigh statehouse.

Several openly bragged about their arrests, fights with cops, and the help with legal entanglements they’ve received from the NAACP. More than 900 arrests have occurred since the protests launched in April. As the audience – a mostly white, elderly group – waited for the meeting to begin, they also talked with impassioned contempt about conservatives. About a dozen students attended the event, which was heavily publicized in the Gender Studies and Journalism departments.

The lack of minorities in the audience, less than 10, was astonishing for a group so entwined with the Rev. Dr. William Barber, president of the North Carolina State Conference of the NAACP. Jesse White, former director of UNC’s Office of Economic and Business Development and an adjunct government professor, began the meeting by asking those who had attended a Moral Monday to stand. Almost 75 percent of the crowd stood.

He then asked all to be seated except those who have been arrested at a Moral Monday. About a dozen remained standing, none of them students. As he continued, he called the movement “inspiring” and Republican state legislators regressive.

The first panelist on tap was UNC sociology Professor Andy Andrews, who has authored a book on the Mississippi civil rights struggle. Andrews on Thursday praised the size and energy of the Moral Monday movement, but warned if it’s not pushed, it would die. He said organizing a social movement of such magnitude was difficult, despite its support from the AFL-CIO and Teamster Unions, which have helped advertise and coordinate protests.

The next panelist up was Jacquelyn Dowd Hall, a noted history professor at the University of North Carolina – Chapel Hill. Hall began her remarks by reminding everyone that she, too, had been arrested, to thunderous applause. She went on to discuss the role that women have played in the Moral Monday protests, claiming that the legislature, through what she described as a draconian abortion bill, was “making it more dangerous for the black woman’s body.”

It was a reference to a law passed over the summer that mandates safety measures among abortion providers, such as calling on them to meet the same standards as surgical centers. Apparently the distinguished history professor has not fully read up on Planned Parenthood – a major supporter of Moral Mondays – or surely she would know the group’s founder, Margaret Sanger, promoted eugenics and has said “birth control must lead ultimately to a cleaner race.”

The next panelist to speak was Dr. Charles van der Horst, a communicable diseases specialist who works for UNC Hospital and is a professor of medicine at UNC. He too was an arrestee who received much applause. The doctor, pictured here with President Obama, claimed Republicans are waging a war on the working class by denying benefits under Obamacare.

“Imagine a city,” he said, “where there are half a million people. How many must die of strokes, heart attacks, diabetes, HIV, AIDS before the (assembly) let us have our federal money?”

“They (the assembly) are fiscally nutty. They cut down the poverty rate for receiving benefits … They want kids to die, and they are harming my patients. That is why I got arrested.”

Another of his points? “The people in the legislature are so regressive. They are trying to push us back to the tribalism we see in modern-day Africa.”

Next came Willie Jennings, a Duke Divinity School associate professor of theology and black church studies, who addressed Moral Monday protesters who’ve made a choice to be arrested. He recalled the words of Dr. Martin Luther King and called that a “liturgical choice,” and said it was in itself a “symbol of freedom.”

However, police have arrested demonstrators because they trespass into roped-off areas of the statehouse. Instead of taking their complaints to lawmakers the old fashioned way, they storm the rotunda.

Lastly, and almost frothing at the mouth, came Nancy MacLean, a prominent U.S. historian and an arts and sciences professor at Duke University, where she teaches courses on the United States since 1945, the American social movement, and public policy history.

By this point in the program, it had become an all-out assault on so-called “right-wing nut jobs.” MacLean said the “right-wing” was more interested in “private property rights” than the “collective good of the state.”

She went on to argue the destruction of North Carolina occurred when “Cato, ALEC, the Koch Brothers, Milton Friedman, Art Pope and his right-wing Civitas group, along with racial conservatives in the south and economic libertarians in the north, came to together to destroy our public school system.” She then railed against the “free market system” they support, prompting laughter from the crowd.

“The Republicans in Washington are trying to take the U.S. hostage,” she said. “They don’t share our moral system, they are trying to impede government because without government we cannot move forward.”

After listening to this for an hour, it became clear to me that the panelists were all pro-Moral Mondays. The event was not a discussion, but a diatribe against a “vast right-wing conspiracy.”

What did I take away from this? That every conservative in North Carolina is a racist baby-killer, hell-bent on destroying public schools. That, and the fact that Moral Mondays should be renamed Moron Mondays.