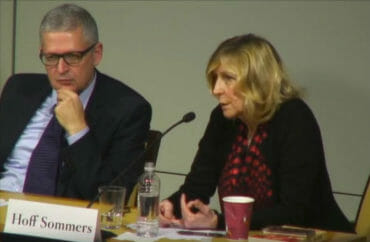 The dark side of promoting self-esteem

There’s a funny side to intersectionality, according to Christina Hoff Sommers.

When the American Enterprise Institute scholar and “Factual Feminist” went to a feminist conference in the early years of the theory, the attendees split up by race, ethnicity, religion and other categories during a breakout session.

Eventually the attendees all began to bicker and quarrel over oppression. Some Jewish women wanted to be proud of being Jewish, while others were trying to “break free” of it.

Sommers eventually bonded with a group of lesbians who were just smoking cigarettes, because it was the only way they were able to connect.

She shared this lighthearted story at the Cato Institute Tuesday night in the midst of a stinging rebuke of intersectionality, which originated in the 1980s and came straight out of Marxism and the self-esteem movement.

Flemming Rose, the Danish journalist and Cato scholar who put a target on his back in 2005 by publishing cartoon depictions of the Islamic prophet Mohammed, also spoke on the panel discussion about the Marxist origins of hate-speech legislation.

The Soviet Union’s Marxist tactics of censorship have morphed into measures that criminalize “hate speech” in every western country except the United States, said Rose, adding that Josef Stalin advocated for the international basis for these laws.

Sommers implored think tanks and campus speakers to “keep sanity alive” by getting involved in more grassroots education efforts and giving more lectures on college campuses warning about the dangers of intersectionality.

The connection between Bolshevism and intersectionality

Sommers said that the term intersectionality was coined by law professor Kimberle Crenshaw, who currently teaches at both UCLA and Columbia, and the original focus was on black women.

Though Crenshaw specifically focused on the intersection of racism and sexism, intersectionality has expanded to other marginalized categories, according to Sommers, who cited a gender-studies textbook currently in use that shows a roadmap of all the different marginalized intersectional groups.

Faculty who push the theory of intersectionality are teaching students that America is a “matrix of oppression,” Sommers told the attendees. The latest trend is for those self-identified marginalized groups to come together to fight all injustices at once, she said, citing student activists at Evergreen State College as an example.

Intersectionality centers on the belief that the lived experience of members of marginalized groups is a better guide to society than previous societal norms established by the bourgeoisie, Sommers said. She cited an article that said the theory was “in crisis” because it was too broad: Every person in the world has a different lived experience and a different perspective.

The darker side of this is that those pushing intersectionality believe they have a right to silence opposing views, she said, just as the Bolsheviks and Marxists in Russia did.

Soviet justification for censorship was centered around the classic communist talking point of the bourgeoisie, according to Rose, the Danish journalist. The people were told that the majority of the press was owned by the wealthy classes and they were trying to “poison people’s minds.”

The U.S. is unique in not adopting measures seen all over Europe and Canada that criminalize supposedly hateful speech, Rose said. The attempt to shut down “fake news” is not a recent phenomenon, he added, saying that justification was the primary force behind the Soviet criminal codes that forbade criticism of the Communist Party.

Rose also observed that while colleges want everyone to have different skin colors, sexual orientations, religion and gender identity, they are strangely averse to different ideas. This confuses him because different experiences naturally foster different ideas.

Sommers said she was glad that those pushing the theory of intersectionality don’t have the power to put people in jail like the Bolsheviks did, because they would probably put her in prison for not agreeing with them.

She cited the microaggression-reporting mobile application MicroReport created by Christy Byrd, an assistant professor of psychology at the University of California-Santa Cruz.

Byrd’s research of the app’s users found that “perceptions of more racial microaggressions were associated with lower self-esteem, lower feelings of competence for daily life, more depressive symptoms and more stress,” she said.

Sommers said she wants to find out if intersectionality is being taught in high schools, because this line of thinking has made “serious inroads in our education system.”

“As long as intersectionality is unchallenged,” Sommers said, “campus fanaticism will go unchallenged.”