A New York high school has canceled a production of “The Hunchback of Notre Dame” after a student activist group complained about a white student being cast in a lead role.

The school now will be putting on an alternative production.

Members of Ithaca High School’s Students United Ithaca — all five of them (below, left) — got together and wrote up a letter and list of demands after the role of Esmeralda went to a Caucasian peer.

“It shows you that theater wasn’t made for you,” said Maddi Carroll, a member of the Students United group who is African-American. “And it shows you that, if you can’t get the parts that are written for you, what parts are you going to get?”

Students United’s letter conceded that the student cast as Esmeralda “is a stellar actor, singer, and dancer” and that any production would be “lucky to have her.”

However, it added: “Our concern is not with her, but with the fact that in terms of demographics, she is the wrong choice for this role.” 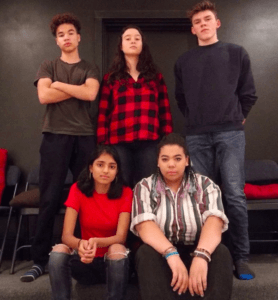 The group’s demands, listed on its Facebook page, included a cessation of play  rehearsals, a stoppage of hiring (production) people who have not “changed their actions” following complaints from “parents of color” and “social justice activists,” and an end to the “racist and openly stated policy of ‘color blind’ casting.”

According to the Ithaca Journal, the activists got their first wish, helped by “a flood of letters from members of the community.”

“Our goal was not just to shut down the musical,” Maddi [Carroll] said. “We want to get a socially conscious director to replace the current director so that everybody can participate.”

Both Annabella [Mead-VanCort] and Maddi said they believe the issue is systemic at the school and that addressing diversity in the musical is the first step in making the school more inclusive.

“This issue is bigger than one part in one musical in one place,” Carroll said. “It’s very very systemic and is very deeply rooted in how we learn and what we do every day. So, we next want to go to the school. We want to branch out from the arts to the school in general and we want to try and make a change.”

The Ithaca School District announced Monday that a new production will replace “Hunchback.” It was delightfully swarmy in its statement:

“We thank everyone for their contributions as we delve further into complex conversations. In addition, we ask that you please stay engaged as we continually work to create community-wide support for our students and school community.”