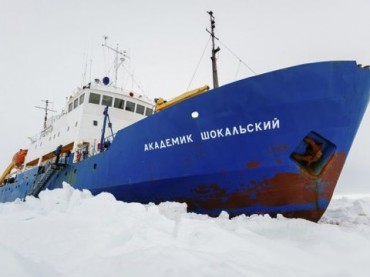 Chris Turney, who holds the title of “professor of climate change” at New South Wales University in New Zealand set out on a sea voyage with the aim of proving that the polar ice is melting due to global warming. Then his ship got stuck in the ice.

“We’re stuck in our own experiment,” said the leader of the Australasian Antarctic Expedition. He and 73 crew members aboard the the Russian ship MV Akademik Shokalskiy became stranded when their ship became trapped in the very ice they had set out to prove was melting.

“We were just in the wrong place at the wrong time,” Turney told Fox News.

The European Space Agency reports that polar ice volume was up by about 50% in 2013, after hitting low point in 2012. But many scientists still say the long-term trend in polar ice volume is negative and poses a threat to the environment. “Over the long term, the trend in Arctic ice is still very much downward, with occasional upticks,” Peter Thomson writes for Public Radio International.

Turney says the fact that his ship is stuck in ice should not be seen as evidence against global warming.

“Sea ice is disappearing due to climate change, but here ice is building up,” the Australasian Antarctic Expedition said in an official statement, according to Fox News.

Several ice-breaking ships have attempted to rescue the stranded scientists, but so far none has been able to get within 10 miles, Fox reports.

It has grown increasingly likely that all 74 members of the Australasian Antarctic Expedition will have to be evacuated by helicopter.