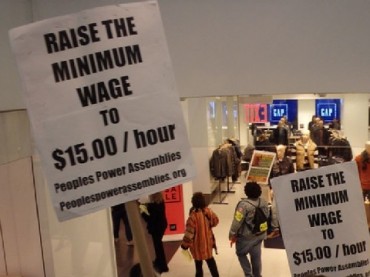 OPINION: Students and recent grads will take the back of the employment line under a steep wage increase

One of my professor’s favorite pieces of advice in “Intro to Politics,” designed for freshmen political science majors and those looking for a quick social science credit, is ominously relevant: “If you’re about to graduate, you had better take that job offer at that GAP back home.”

While no fresh graduate wants to end up back at home working at the GAP in the strip mall near the local elementary school, that’s the trajectory that the current job market is headed.

Seattle Mayor Ed Murray and his city council are certainly not helping by unanimously – and unprecedentedly – voting to raise the minimum wage more than 60 percent over the statewide $9.32.

At $15 an hour, Seattle will have the nation’s highest minimum wage as it phases in over five to seven years.

Students and graduates who are looking to have a leg up on the competition, stave off moving back to mom and dad’s place and start chipping away at the mountain of student debt, will find it increasingly hard to compete for a job in Seattle.

This summer I landed a job at a Seattle restaurant for a little above minimum wage. Being completely new to restaurant work, there is absolutely no way I would have been able to get the same job if the minimum wage were $15.

Put yourself in the shoes of those evaluating the new arrivals to the job market. If I’m a manager at Starbucks and have 30 applicants, I would rather hire the one with extensive barista experience simply because they are most worth that steep $15 wage.

Local franchisees are counted as “big companies” under the law, and they will probably have the strongest incentive to avoid students and recent grads.

Ron Oh, a Holiday Inn Express franchise owner, captures this general resignation in a Seattle Times profile of a handful of businesses affected by the law.

“We’ll do our best to become more efficient,” Oh told the Times. “Rooms have to be cleaned faster, and if people underperform, instead of working with them more, we’re going to have to let them go.”

What about the neighboring city of SeaTac, home to the region’s main airport, which raised its minimum wage to $15 effective this year through a ballot initiative?

It hasn’t worked as beautifully as believers would have liked. Scrapping benefits like 401(k) plans and vacation time, and putting additional burdens on consumers such as higher parking costs, are ways that businesses in SeaTac have sought to save money. If you work in Seattle, there’s a good chance your employer will have to take away benefits and employee lunches or raise costs in order to raise your wage. They might close or replace you altogether. Want to compete with a burger machine that can make 360 “gourmet” burgers in one hour?

Not only does a higher wage make job applications and interviews more competitive – it raises overall structural unemployment, which is affected by things like minimum wage, unemployment benefits and healthcare benefits.

At nearly $6 above current levels, the new minimum wage will radically affect structural unemployment. Unfortunately, that’s probably going to be students and recent graduates like you and me.

The Seattle City Council itself didn’t appear to understand those incentives.

This is how the political director for Socialist Council Member Kshama Sawant put it, according to the Times: “Support for $15 exists not because people have done the math and said, ‘Gee, this is what the minimum wage should be.’”

That’s it in a nutshell. The $15 figure was neither a well-informed nor mathematically precise choice.

It was a politically motivated number that looked good on a “bumper sticker,” as put by Peter Dreier, chairman of the urban and environmental policy department at Occidental College, in the Times.

Don’t the people of Seattle deserve more than that?