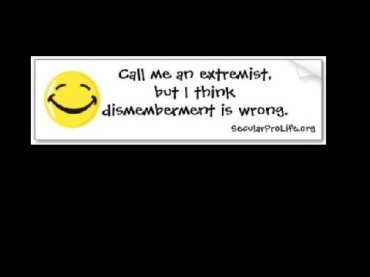 You don’t have to believe in God to be pro-life.

That’s the message Kelsey Hazzard, founder and president of Secular Pro-Life, has continually proclaimed at colleges across the nation since she founded the organization in 2009.

Although she grew up attending a Methodist church, Hazzard rejected religion toward the end of law school.

“It’s not that I have anything against Christian people or the church I grew up in,” Hazzard said in an interview with The College Fix. “I think there are plenty of good Christian people out there. I’m not a militant atheist; it just isn’t something I believe in.”

But religion or no, Hazzard has been pro-life ever since she knew what abortion was, and became active in pro-life groups while attending the University of Miami. It was there that she attended a March for Life, and was taken aback by how “Catholic” it was.

“There needs to be a place for pro-lifers who are atheist or agnostic,” Hazzard said. Secular Pro-Life is a volunteer-run organization and a rallying point for those who sympathize with the pro-life cause for reasons other than religious conviction.

There are more than 6 million people in the United States who are non-religious prolifers, according to a Pew Research Center statistic touted on the site.

Secular Pro-Life is about 5-years old, and is completely internet-based. SPL does not have a physical headquarters. In fact, Hazzard has never even been in the same room with Monica Snyder, her “right hand” who is based in California.

“We joke that we will finally meet at one of our weddings,” Hazzard said. “We talk on the phone, we text, but have never actually met in person.”

Hazzard and Snyder both travel to colleges to give presentations for Secular Pro-Life, with Snyder taking the West Coast and Hazzard taking the east. They see college students as a very important demographic in their outreach.

“Age is a major factor,” Hazzard said.  “Under-30 people are the least religious, and the most pro-life. It’s in this college group that we have the bulk of our support.”

At the group’s college presentations, the audience hears a lot of talking points that are broached at many other pro-life presentations.

“We make a basic case. We talk about human life, prenatal development, and give them a perspective they haven’t heard before,” Hazzard said. “Or if they have heard it, they heard it from a religious person and didn’t take it seriously. Maybe what the priest said was accurate, but he’s a priest so they may not take it seriously.”

But the organization also reaches out to their audience in ways that are atypical of a pro-life presentation. For instance, it fully supports contraceptive use, and doesn’t tie the abortion issue to other moral issues, such as gay marriage.

Most college students come with a general intellectual curiosity, they haven’t heard this perspective before and they are interested and respectful. In one incident at the University of Georgia, some college students tore down legally posted fliers for the event, but Hazzard said this isn’t typical.

“Some people who are pro-choice come, but are pleased to see that we support contraception,” Hazzard said. “Others don’t like us because they see us as a threat to abortion rights. Which we are.” SPL does have support from many Christians, Hazzard said, though they tend to be more liberal Christians who don’t identify with the political right.

Not all Christians are so friendly toward the organization, however.

In a comment on a blog post several months ago, Hazzard said that a commenter seemed genuinely concerned that “Satan was trying to destroy the pro-life movement from within.”

“There’s not a lot you can do to respond to that. I try to keep things upbeat. Abortion is a very heavy topic, but you have to find humor in your activism or you will burn out and go nuts,” Hazzard said.