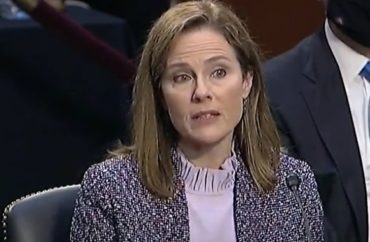 None of her law school colleagues signed the letter

A group of 88 University of Notre Dame faculty members have released a letter asking Judge Amy Coney Barrett, a Notre Dame law professor, to ask for a pause in her Supreme Court confirmation process.

Notably, not one signer is actually a professor in the law school. In fact, of the 88, seven are librarians at the Catholic university’s Hesburgh libraries.

Others signers include members of the theatre, physics and gender studies departments. They want Barrett to “issue a public statement calling for a halt” to the “nomination process until after the November presidential election.”

What’s most interesting about the letter is the composition of its signatories: To a man, they belong to colleges and departments at the university other than Notre Dame’s law school. Not a single one of Barrett’s faculty colleagues in the law school signed on.

In fact, according to Senator Ben Sasse, when Barrett was nominated to the Seventh Circuit Court of Appeals, she was recommended unanimously by her Notre Dame Law School faculty colleagues.

The letter is posted on teacher-scholar-activist.org, a faculty-run blog “where teachers share the small local moves that matter in our communities.”

Cory Booker just cited the open letter from Notre Dame faculty calling on Barrett to withdraw her nomination. As I said earlier, not one of those faculty members is a colleague of Barrett’s in Notre Dame’s law school.

It argues that the Senate should halt the confirmation process because voting has already started for the 2020 election.

We ask that you honor the democratic process and insist the hearings be put on hold until after the voters have made their choice. Following the election, your nomination would proceed, or not, in accordance with the wishes of the winning candidate.

It also makes reference to the alleged “dying wish” of Justice Ruth Bader Ginsburg that her seat not be filled until after the election.

In conclusion, the signers argue that Barrett could help push back against a variety of political polarization problems:

Finally, your nomination comes at a treacherous moment in the United States. Our politics are consumed by polarization, mistrust, and fevered conspiracy theories. Our country is shaken by pandemic and economic suffering. There is violence in the streets of American cities. The politics of your nomination, as you surely understand, will further inflame our civic wounds, undermine confidence in the court, and deepen the divide among ordinary citizens, especially if you are seated by a Republican Senate weeks before the election of a Democratic president and congress. You have the opportunity to offer an alternative to all that by demanding that your nomination be suspended until after the election. We implore you to take that step.

The current schedule includes hearings this week and an expected floor vote on Oct. 26, according to the Associated Press.