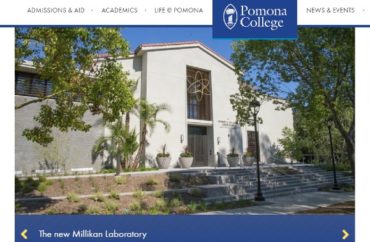 Robert Millikan’s name adorns buildings at Caltech, Pomona College and other institutions of higher education. He won the Nobel Prize in physics in 1923.

And typical for a scientist of his time, he was a fan of eugenics and did not actively promote women in STEM fields.

That’s reason enough to remove his name from a Pomona building with labs for physics, astronomy and math, according to a petition circulated among Pomona students, alumni and faculty, according to The Claremont Independent, which covers Claremont Consortium colleges including Pomona. The 1958 building was modernized in 2015.

Dwight Whitaker, chair of the physics and astronomy department, appears to be the only professor to have signed the petition as of Wednesday afternoon. Nearly all signatories are alumni; only 15 are listed as current students (classes of 2021 and 2022).

More professors are likely to join Whitaker, and not just because he’s their boss: Pomona has hosted a mandatory “Decolonizing Physics” symposium at least three times in recent years.

The petition argues that Pomona “can no longer honor individuals who have championed racist, sexist, and anti-Semitic beliefs and actively supported the enactment of crimes against humanity.” It cites Millikan’s trusteeship of the Human Betterment Foundation, which promoted forced sterilization and “actively shared their materials with officials in Nazi Germany” but shut down in 1942.

He also celebrated California as “the farthest western outpost of Ar[y]an civilization,” and Southern California for a much larger proportion of “Anglo-Saxon” people than other major cities in America, it says.

The Independent says the petition misunderstands the meaning of “Aryan” in Millikan’s time:

Prior to the Second World War, when Millikan’s remarks were made, the term “Aryan” referred to all people who speak Indo-European languages, including those who originated from the fringes of western Europe all the way to Sri Lanka. During and after the Second World War, the term is often used by white supremacists to refer to people of Northern European descent.

The newspaper also notes the petition denounced Millikan for recommending “one or two” men for a physics faculty slot when he was at Duke University, rather than a woman up for consideration, even as Millikan acknowledged women did “outstanding work” in science as a whole:

On a post advertising the petition, one student referred to him as a “sexist racist,” with another saying “f**k nazis.” One commenter requested specifically that the building be renamed after someone who is/was black.

Activists with Pomona ties have not gone after another building namesake who actually funded eugenics research, according to the Independent: Andrew Carnegie.