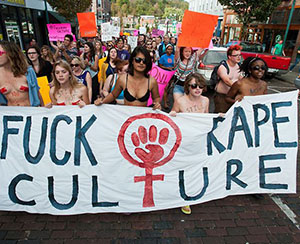 One of the more noteworthy parts of Emily Yoffe’s thorough analysis in Slate of the campus response to sexual-assault allegations is her interviews with the authors of studies frequently cited by administrators, elected officials and victim advocates.

Susan Kruth of the Foundation for Individual Rights in Education, whose role in fighting for the due process rights of accused students is mentioned in the Slate article, highlights the relevant passages:

There are approximately 12 million female college students in the U.S. (There are about 9 million males.) I asked the lead author of the study, Christopher Krebs, whether the [College Sexual Assault Study] represents the experience of those millions of female students. His answer was unequivocal: “We don’t think one in five is a nationally representative statistic.” It couldn’t be, he said, because his team sampled only two schools. “In no way does that make our results nationally representative,” Krebs said. And yet President Obama used this number to make the case for his sweeping changes in national policy.

Regarding David Lisak, “whose study on repeat offenders has also played a significant role in discussions about campus sexual assault,” Yoffe says:

I asked Lisak whether it was fair to presume any given accused student is a serial predator. He said such a supposition would be “sloppy thinking.” He went on: “You have to investigate the assault and who the individual is. Everything hinges on the investigation.” He also said that a major problem with adjudicating campus sexual assault is how ill equipped universities are to conduct such investigations.

It’s hard to imagine President Obama reining in his own Department of Education, but Yoffe is unequivocal about fixing the “overcorrection”:

A good place to start would be scaling back the powers of the Department of Education’s Office for Civil Rights, which has overstepped its bounds in micromanaging university policies and enforcing draconian rules that infringe on the rights of the accused. And before making policy based on alarming statistics, officials should ponder a study’s limitations and read all the footnotes.

And in a call to action that more administrators should embrace without reservations:

The prohibition about discussing the connection between alcohol and sexual assault should be lifted. We don’t live in a perfect world, and while school administrators should do their best to provide safe environments, it is up to each individual to make wise decisions. Getting incapacitated has no upside for young men or women. Administrators ignore the role of alcohol in sexual assault at their peril, and at the peril of their students, men and women.

That presumes a latent level of courage and endurance that I’m not sure exists in the vast majority of college presidents, deans and trustees.

But articles by influential writers like Yoffe and New York‘s Jonathan Chait are a good place for cowed administrators to turn for backup when the “rape culture” chorus becomes belligerent and starts throwing around statistics with no context.