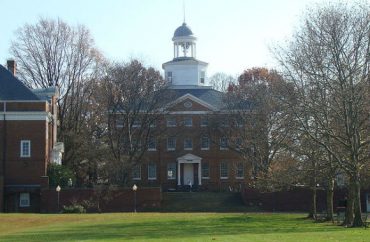 On its surface, the restructuring plan under consideration at St. John’s College is about streamlining functions, saving money and creating better lines of authority.

But some faculty, students and alumni aren’t buying the administration’s explanation of the plan, and a former board member has accused it of pushing one of the few colleges friendly to conservatives toward “politically correct mediocrity.”

St. John’s leadership has forcefully pushed back against insinuations that it will dump its so-called Great Books program, and several alumni told The College Fix that the outside attention is distorting the real debate over the plan.

At least one competing school devoted to the classics is promoting itself in direct response to the dispute.

The Saint Constantine School, which is scheduled to open in August and serve students from kindergarten through undergraduate college, will “emulate” the best of the St. John’s program but “never bow to fads,” President John Mark Reynolds tweeted on Thursday.

One real president, one fake president?

The St. John’s proposal, which will go before the Board of Visitors and Governors for a vote on June 18, could change the balance of power between the college’s two campuses – the original in Annapolis, Md., and the newer campus in Santa Fe, N.M.

Both have their own presidents and self-governance, but the 25-year leader of Annapolis, Chris Nelson, is retiring after the next academic year.

The board agreed at a “special meeting” last month to make the Santa Fe president, Mark Roosevelt, the “college-wide president” starting on July 1. Nelson’s successor would report directly to Roosevelt, who joined St. John’s a year ago from Antioch College. Such a change requires “polity” amendments and a 30-day comment window.

The administration said the plan was part of ongoing efforts to “reduce operating deficits,” adding that it would “improve the college-wide decision making process” and better deal with “our financial challenges.”

‘On the road to intellectual blandness and conformity’

In a scathing column for RealClearPolitics on Monday, former board member Roger Kimball warned that the restructuring amounted to a “coup.”

He said it could obliterate the college’s unique structure, which is “deeply Socratic” and led by “tutors” who guide all students through the same works, and put it “on the road to intellectual blandness and conformity.”

Kimball portrayed the change as a takeover by Santa Fe, which was cursed by “the 1960s” in a way that Annapolis wasn’t.

The great-grandson of Teddy Roosevelt and Democratic nominee for Massachusetts governor in 1994, President Roosevelt has “no discernible scholarly interests,” Kimball said. He cast doubt on Roosevelt’s commitment to the Great Books program because his tenure at Antioch was marked by furthering “social justice.”

(Kimball’s reference to Roosevelt’s Wikipedia page appears to have led Wikipedia users to edit the page on Tuesday, its first changes since December 2013.)

How is this saving us money?

Current and former faculty say they don’t understand the administration’s case for the plan.

St. John’s alumna Mary Duffy has posted several letters critical of the plan, including an email to the board from Jonathan Tuck, a former tutor and dean, which said the proposal was universally opposed at the Annapolis campus.

“Even the Student Delegate Council has opposed” the plan, which has caused “much bewilderment, grief and anger,” said Tuck’s email. It accused the board of approving the plan “at exactly the least convenient moment in the academic year.” (A College Fix message to Tuck’s email at St. John’s bounced back.)

Taking a different tack than Kimball, the tenured Annapolis faculty unanimously adopted a statement May 13 that said having a college-wide president while keeping the Annapolis president “will confuse lines of authority and reduce accountability.”

Making the Annapolis president a “nominal” figure will create needless expense, “contrary to the purpose” of the consolidation, and whoever occupies the office will lack the “full stature necessary” to lobby lawmakers and court donors, they said in the statement, also posted by Duffy.

Duffy also posted dueling emails among board members. Wilfred McClay accused his colleagues of “a top-down imposition that violates the rational, collaborative, and deliberative spirit of this community,” and Richard Groenendyke belittled McClay in response, accusing him of “arm chair opining” that ignores “a financial crisis … that is out of control.”

McClay did not respond to an email from The Fix. Former Santa Fe President John Agresto declined to comment “in detail” because he has been “out of SJC for 16 years,” but told The Fix that the structural debate was separate from the threat of political correctness.

Duffy herself called the plan a “coup” and said she was confused by how it would “save St. John’s from financial ruin,” as the administration claims. The board’s “ignoring any voices of dissent, including the entire faculty of the Annapolis campus seems very strange,” she wrote.

‘A number of misstatements’

If Kimball wanted to make a splash with his article, he succeeded.

Among those alarmed by his accusations was Republican Sen. Ben Sasse, a former college president and St. John’s alum. In a tweet he encouraged the board to reassure Annapolis.

Lots of worried @stjohnscollege alum. The Board could comfort by publicly affirming Annapolis campus & its program.https://t.co/js9qZAMYUR

Outgoing Annapolis President Nelson and Board Chairman Perry Lerner blasted Kimball for “a number of misstatements and inaccuracies” in his article.

Responding Wednesday in RealClearPolitics, they said Roosevelt and the board do not have “any designs” on changing the academic program.

Rebutting Kimball’s criticism of Santa Fe as the weaker campus, Nelson and Lerner said its finances “have become strong enough” in the past 10 years that they can be governed “without the need to isolate” them from each other, which is wasteful and duplicative.

Though they said more than one proposal is being considered, Roosevelt would be the college-wide president “under any of the proposals” because “he enjoys such widespread support” across both campuses. Nelson and Lerner did not address the critical faculty letter.

‘There is no debate’ – Kimball is wrong. Or just ‘unhelpful’?

Though Kimball’s article has been taken at face value by social-media users who do not have a stated connection to St. John’s, he has been criticized by several self-described alumni – both in article comments and social media – who say his claims are speculative.

Alumna Kate Havard, a former journalism fellow at The College Fix, said her own research has found “the overwhelming consensus is that Kimballs [sic] contribution has been unhelpful” to the discussion over the plan’s merits.

“I’d be unhappy if Kimball’s piece was the first thing someone heard about St. Johns [sic],” alum Benjamin Liebeskind, a postdoctoral fellow at the University of Texas-Austin, told The Fix in an email.

“There is no debate about whether Kimball or right or not” beyond the merits of the plan: “I haven’t heard a single voice say he is,” Liebeskind said. “[I]f anything resembling what Kimball reports actually happened, most alumni would break ties and stop giving” and Liebeskind would “be the first to go for my pitchfork.”

The faculty are upset with the board’s “high-handed manner,” not the idea of a single president, which has precedent in St. John’s history, Liebeskind said. “I think people in Annapolis are unhappy because they will have less access to the single president … and some staff will certainly lose their jobs,” but the plan has “no political dimension that I’m aware of.”

“Many of them became conservative there because of the [academic] program,” and the school needs more diverse recruits because it isn’t drawing the ones who want to “major in The African Diaspora with a minor in Civil Disobedience,” he said.

Alumna B.D. McClay, associate editor at The Hedgehog Review and relative to board member McClay, wrote that St. John’s has the same tensions as other small schools: between liberal-arts purists and “sensible people” who want a “sensible overseer” in charge.

She called it “strange” that the restructure plan leaves in place “high-level salary positions,” and thanked Kimball for bringing attention to “the larger trend” facing such schools, such as disrespect for faculty governance. But Kimball is wrong that this dispute is about “culture war or social justice,” McClay wrote.

An unidentified Twitter user who said he was close to Kimball’s politics nonetheless accused the writer of “misrepresenting” and poisoning the debate by “imputing ideological motivations where they do not exist.”

That user, who told The Fix he was a 2010 graduate, said in a tweet “Kimball has pissed everyone off (conservative and liberal alums alike) by politicizing this” in alumni-only Facebook discussions. He declined to share those conversations with The Fix, citing “group rules. … Suffice it to say that the overwhelming reaction has been negative.”

In a public Facebook group for St. John’s, criticism of Kimball and “rumors” seems to dominate discussion of his article. One student did say he was concerned about the board’s “understanding of the College as the principal instantiation [sic] of the liberal arts.”

Alumna Duffy, who shared the letters from faculty and board members, also said Kimball had a “horrible take” on the situation.

Asked about the response to his article, particularly criticism from the administration and alumni, Kimball told The Fix on Twitter: “Pretty anemic response I thought. I have had a lot of reaction. The folks at Santa Fe didn’t like it, but that is hardly surprising.” He did not respond to a followup query for more specificity on responses he has seen.

Kate Bennett of Independent Journal responded to a request for comment but did not answer followup questions.

CLARIFICATION: Former tutor Jonathan Tuck’s email to the board appears to have been first publicly shared in full by St. John’s alumna Mary Duffy on May 24, two weeks before Roger Kimball excerpted it on RealClearPolitics. The article has been amended accordingly.