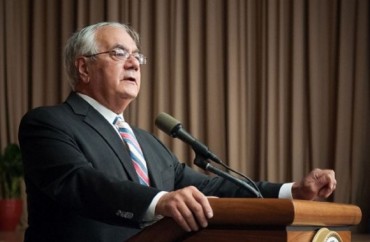 Barney Frank, the former Democrat Congressman from Massachusetts whose 30-year career in politics was marked with several scandals – including male prostitution and a major role in the worst financial meltdown in recent history – gave an “ethics” lecture at Stanford University earlier this month.

Frank delivered the talk Feb. 8 as part of the prestigious university’s Center for Ethics in Society lecture series that aims to “address social and moral questions,” according to its website.

Stanford University officials rebuffed a request from The College Fix that asked whether Frank was a good representation of political ethics for students.

According to one student who attended the lecture, Frank argued in part that America’s biggest problem is “excessive inequality” and suggested the country needed to legalize drugs and cut military spending.

“Tracking how Frank’s solutions were connected to inequality was difficult, but it appears his logic was that we cannot fight inequality directly since raising taxes is a political non-starter, so we should try to fight the negative effects of inequality with spending on health care, housing, and education,” reported Stanford student Elliot Kaufman in The Stanford Review in summarizing Frank’s comments. “The problem is that we cannot afford this, so we need to cut military spending and legalize drugs. Then we’ll have the money for new programs that will mitigate inequality, making people less angry and more rational in their voting.”

Frank retired from Congress in 2013. He is known as one of the first openly gay Congressmen in the U.S.

Among Frank’s most infamous scandals, Frank paid a male prostitute for sex, a man who also worked as a prostitute from Frank’s home and whom Frank attempted to get out of minor legal troubles by using his influence as a congressman. That was in the late 1980s.

Rep. Frank, the former chairman of the House Financial Services Committee, also shares much of the blame for the financial mortgage crisis of the last decade in which banks doled out massive home loans to unqualified buyers, most pundits on both sides of the aisle agree.

Judicial Watch obtained internal government documents “proving that members of Congress, including — and perhaps especially — Frank, were well aware that Fannie and Freddie were in deep trouble due to corruption and incompetence and yet they did nothing to stop it.”

The group reports it also obtained internal documents from the Treasury Department that show Frank helped steer $12 million in federal bailout funds to a Boston bank in his district that eventually got shut down by the government.

Moreover, Fox News reported in 2008 that Frank’s efforts to deregulate Fannie Mae throughout the 1990s benefitted his partner, “a Fannie Mae executive at the forefront of the agency’s push to relax lending restrictions.”

“Now that Fannie Mae is at the epicenter of a financial meltdown that threatens the U.S. economy, some are raising new questions about Frank’s relationship with Herb Moses, who was Fannie’s assistant director for product initiatives,” Fox News reported. “Moses worked at the government-sponsored enterprise from 1991 to 1998, while Frank was on the House Banking Committee, which had jurisdiction over Fannie.”

At Stanford this month, Frank’s opinions to his audience included quips such as “there are a large number of people in this country who only care about protecting their unrestricted right to buy firearms and nothing else” and “the single dumbest thing America ever did was invade Iraq,” the Stanford Review reports.

The Stanford Center for Ethics in Society’s website describes its mission as being “committed to bringing ethical reflection to bear on important social problems through research, teaching, and community engagement.”