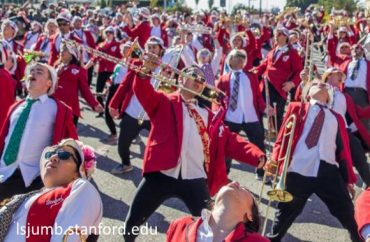 ‘University chose to make the Band a political scapegoat’

Stanford University’s funky and daring yet controversial marching band has been suspended through the spring 2017 semester, prompting band members and others to denounce the sanction as unfair and a crack down on student freedoms and the institution’s longtime traditions.

Critics say administrators just want to punish and take control of the band, and have ignored band members’ recent efforts to better themselves and the organization.

The university’s suspension of the band — which has a long reputation for antics taunting rivals — came after what administrators called “constant and repeated violations” of alcohol and travel rules and a “systemic cultural problem.”

Stanford officials are moving forward with plans to replace the current student-managed band leadership model with a professional music director. They may push the suspension past Spring 2017 as well.

In a statement released by the Leland Stanford Junior Marching Band, also just known as “Band,” members denounced that decision.

The suspension sends “the disturbing message to the Stanford student body that the Administration chooses authoritative control and administrative expediency over student freedom,” it stated.

“In the 1970’s, President Richard Lyman was presented a check for $1,000,000 on the stipulation that he denounce the Band. As the story goes, he tore up the check and emphatically declared ‘We love the Band!’ Since then, Band has maintained its irreverent nature, knowing at its core that the University respected and supported this freedom of expression, authenticity and the value of the community the Band created,” the statement read. “How times have changed.”

The band’s statement goes on to note that 2015 sanctions placed on the band for actions that occurred during 2011-2012, such as alcohol-related hazing, have been addressed by members.

“For the past two years, Band members have put thousands of hours into satisfying the Administration’s requests – all while balancing coursework, research, and trying to enjoy what we’re told are the best years of our lives. Band approached issues brought forward in good faith and with real effort, and this work has resulted in genuine and substantial progress in creating a Band that better mirrors the organization we want to be,” the statement read.

“We have held hundreds of hours of trainings and discussion, explicitly formulated our values, restructured selection processes for Band roles, evaluated and made appropriate changes to our traditions, and rewritten our founding documents to reflect the present cultural attitudes within the organization.”

All those efforts have been shrugged off by administrators, according to band members.

Sam Weyen, the band’s Tree mascot, told The College Fix that while “there are grains of truth in all of the charges … the suspension of the band for a cultural endemic is despicable.”

He said band members have made improvements and didn’t deserve the punishment.

“There were problems then, making people uncomfortable, and so we amended it,” he said. “We were truly taking care of our members. We made a positive change.”

Weyen does not deny some rules were broken — he says a trip to Lake Tahoe was not officially approved — but that band members were by in large behaving and trying to do better.

Some band members also contend the rules they were asked to live under are unclear. Band member Julia Howell says the university’s new alcohol policy is vague.

“Title IX and the [Organization Conduct Board] hasn’t been clear with the boundaries. So we’ve been operating on an ask about this, ask about that basis,” she told The Fix. “It feels like the sanctions set us up to fail.”

The administration contends that the Band broke its alcohol probation a number of times, though Weyen says at least one of the incidents was a birthday celebration in which all members were of drinking age.

The Stanford Review editorial board also criticized the administration for its alcohol policy, which led to the infractions.

The Review pointed out the hypocrisy in the matter: “Alcohol flows in excess at university-approved frat parties and freshman dorms almost every weekend of the academic year.”

The Review called the band a “wildly irreverent student-run organization, one of Stanford’s best-loved traditions.”

“No 2011-2012 Band member is still an undergraduate. The current Band lineup is being punished for actions in which they did not participate while being denied credit for their own positive contributions,” the Review points out. “… The university could have pursued a more moderate course of action, but instead chose to make the Band a political scapegoat. At the next game, not only will our hollowed-out ‘band’ be silent. So too will the winds of freedom.”

The Band has also received an outpouring of support from students and faculty. On one recent Saturday earlier this month, more than 400 people came out to a public event to tell stories and encourage the Band.

“We have gotten 300 to 500 calls from people saying they came to Stanford over Brown, Harvard and Yale because of the Band,” Weyen said.

And in a recent op-ed in the Stanford Daily, an unnamed female student declared that “as a rape survivor, Band was my healing space.”

“The very things that OCB has cited as examples of sexual hostility were the things that helped me achieve peace with myself and feel comfortable again in my own body,” she wrote. “Spelling the word ‘sexion’ with an ‘x,’ making sexual jokes, having suggestive signage in the Shak and dancing with hip thrusts were all part of a sex-positive culture that helped me overcome my trauma.”

“Watching Band be dismantled slowly over the past two years and then be legitimately ended last Friday has been hard for me,” she continued. “It’s been hard watching the hours and hours of work I put in toward making Band a better place be dismissed with the conclusion that the University’s demands ‘have not been taken seriously.'”