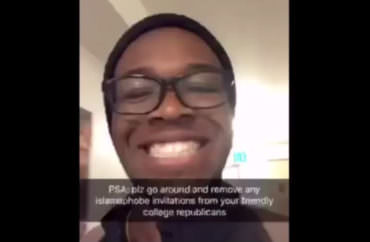 One of many attempts to limit audience for event

Leftist students at Stanford University are getting help from the administration in blocking people from hearing about a Tuesday campus lecture about the threat of radical Islam.

Not only did a student send a mass email demanding that student activity fees appropriated for the Robert Spencer event be taken back, but staff in one residence hall implied they would tear down flyers for it.

The event is co-hosted by the College Republicans chapter and Young America’s Foundation. Since it was first advertised, at least one person is known to have torn down flyers for the event – because he shared video of himself doing it.

Young America’s Foundation has continually shamed the Stanford administration in public for trying to minimize the event’s reach, including through a ban on livestreaming it.

‘We want to empower your freedom of speech, and it is our job to create a safe space’

Spencer is the director of Jihad Watch, and the Southern Poverty Law Center describes him as “one of America’s most prolific and vociferous anti-Muslim propagandists.”

Caleb Smith used “The Diaspora” listserv, which describes itself as “the virtual soul of Black Folks at Stanford,” to email several listservs Nov. 1 about the event with the “Islamophobe” Spencer.

“[I]t does not make sense to use $6,000 of student funds to support a speaker who is actively hostile to a large and valued segment of our campus community,” Smith wrote, adding that if his petition gets 800 signatures, “we may be able to freeze funding.” Less than three hours later, Andrew Quirk sent an email to a Twain Hall listserv in the name of “Your staff” on the subject of Spencer flyers in the dorm, which was discussed at that evening’s house meeting.

Titled “Community Safety,” the email says staff in the all-freshmen dorm “recognize and support freedom of speech, and we also value safety”:

The flier makes people of some marginalized identities feel unsafe, and that is not OK. Twain is your home. It is where you live, and everyone deserves to feel safe. These fliers are not welcome. The hallway spaces belong to the Twain community.

Quirk, who is sophomore class president of the Class of 2019, asks residents to talk to staff if something in the hall “ever makes you feel unsafe … We want to empower your freedom of speech, and it is our job to create a safe space.”

Ari Kelman, one of two “resident fellows” for Twain Hall, told The College Fix he could not comment on Quirk’s email in the name of residence hall staff.

College Republicans ‘hope to charge him with vandalization and theft’

Sometime in early November, an unidentified person recorded himself tearing down flyers for the Spencer event.

Young America’s Foundation obtained the video. It said in a Nov. 6 post the video was originally posted to Snapchat with a caption that encourages others to “remove any islamaphobe [sic] invitations from your friendly college republicans.”

YAF mocked Spencer’s critics, asking what was “hateful” and “Islamaphobic [sic]” about Spencer’s opposition to “throwing gay men off buildings” and “using a truck to mow down bicyclists in Manhattan.” (Spencer himself blogged: “Why is Stanford’s fascist community so angry that I am set to speak? Are they for the jihad mass murder of innocent civilians? The beating of women? The execution of gays?”)

YAF said Stanford had “barred the public from attending” and “banned live-streaming of the speech.”

An executive in the College Republicans told The Fix that though closed to the public, the event has an “outside guest list” with 30 slots for non-Stanford attendees.

That decision was “forced” on the CRs by the Stanford administration, which told the club “the security cost would [be] beyond our mark of affordability if the event were open to the public,” said the executive, who asked not to be identified.

The executive also mocked the effort to prevent the community from hearing Spencer’s message.

Smith’s petition would violate the student government’s constitution, which only authorizes the freezing of funds that “have not been expended or encumbered” pending a referendum.

Spencer’s funds have already been encumbered, so even though it reached the number of signatures needed, “the petition was dead on arrival,” said the executive: The CRs are “grateful” to Smith for giving their event free advertising with his “baseless” petition.

Regarding the flyers, the executive said they cannot be removed until “after the date of the event advertised,” so the CRs reported the video vandal to the police “and we hope to charge him with vandalization [sic] and theft.”

Conservative speakers at Stanford have “seldom been afforded the opportunity to express their views to an audience beyond that of the Hoover Institution,” the right-leaning research organization based at Stanford, the executive said.

The administration issued two responses to the planned Spencer event, though the first didn’t mention it directly.

They cited the “freedom of inquiry” protected in Stanford’s official statement on academic freedom, and said the university must prepare students for a society “where active citizenship and meaningful work require engaging with a broad diversity of individuals, ideas, and arguments.”

The administrators also noted that an earlier Stanford speech code had been struck down in court under a California law that explicitly protects the First Amendment rights of students at private universities such as Stanford.

Ominously for student activists, they warned that disrupting speakers is both “inconsistent with our values and carries consequences” as a violation of the conduct code.

The Nov. 7 post didn’t go far enough for other members of the administration.

Two days later, in a post titled “On the Robert Spencer event,” Vice Provost for Student Affairs Susie Brubaker-Cole and Dean for Religious Life Jane Shaw denounced Spencer for his “track record of actions and speech that motivate hatred towards Muslims”:

We acknowledge the emotional impact of Mr. Spencer’s visit on university community members, and we are actively developing supports for the Muslim community before and after his visit.

While acknowledging the earlier blog post and encouraging Spencer’s critics to use their own speech “forcefully and peacefully,” Brubaker-Cole and Shaw said “some ideas that we allow to circulate are counter to our values and cause members of our community to experience fear or hurt.”

Asked what the campus guidelines were for flyers, the Stanford administration instead forwarded The Fix to the College Republicans. It did not respond to a second request for comment on the Muslim support efforts mentioned by the two administrators Nov. 9.