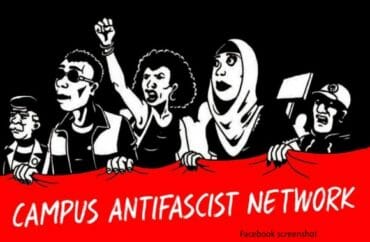 Students with several right-of-center organizations at Stanford University are calling for the resignation of a professor who has ties to the radical extremist group Antifa.

Students with the Stanford Review and Stanford College Republicans are pushing for the Stanford University professor to either resign or cut ties with the Campus Antifascist Network he co-founded.

Antifa is known for its black-clad and masked violent “protests” that can end up leaving people injured and property destroyed.

And students with the Stanford Review and the Stanford College Republicans say they believe that being involved with a group like this is simply unacceptable for a professor at their school.

In a Facebook post, the Stanford College Republicans aired their discontent, saying that they are “disgusted” that Professor David Palumbo-Liu is a “ring-leader” in the “domestic terrorist antifa movement.”

“Antifa’s violence and thuggery is antithetical to the purpose of a university as an institution dedicated to the free exchange of ideas. We call on the administration to reprimand Palumbo-Liu and for him to resign immediately,” according to the statement.

Palumbo-Liu is a comparative literature professor at Stanford University. Two years ago, he was dubbed as “Stanford’s most radical professor” by a piece in the Stanford Review, which detailed his anti-Israel activism.

Last week, the Review refocused on the professor.

“Antifa Thugs Find a Champion and Leader in Stanford Professor” by John-Rice Cameron and Anna Mitchell, a member of the Stanford College Republicans and the Editor-In-Chief of the Stanford Review, respectively, called for Palumbo-Liu to either “condemn and dissociate from the Campus Antifa Network immediately, or else resign as a professor at Stanford University.”

There is no way to reconcile David Palumbo-Liu’s position as a professor teaching students with his status as the campus representative of an ideology known for inspiring savage assaults of students holding opposing political opinions. David Palumbo-Liu has every right to express his views in the classroom, and opposing racism is certainly a worthy cause. However, assuming a leadership position in a movement whose activities have been classified as domestic terrorism by the DHS and FBI is utterly intolerable.

The two also lay out how Antifa has engaged in violence and the suppression of free speech on campuses by referencing their violent protests, including one against Milo Yiannopoulos at UC Berkeley, which caused over $100,000 in damages.

They also highlight Palumbo-Liu’s involvement within the Antifascist movement, most notably emphasizing the organization that he and Purdue University professor, Bill Mullen, co-founded, the Campus Antifascist Network, which the piece said is “undeniably a chapter of a terrorist group.”

When asked via email by The College Fix if he would like to address the op-ed, Palumbo-Liu responded by saying, “simple answer: no.”

Stanford University did not respond to multiple requests for comment on this situation from The College Fix.

The CAN website states its aim is to bring people together to “stem the rise of fascism, whether proudly displayed in hateful exclusionary slogans and posters, or disguised as ‘free speech.'” To fight fascism, CAN plans to “mass counter-mobilizations and broad-based coalitions as key to the fight against these forces.”

Palumbo-Liu has penned a response to the piece in the Stanford Daily titled, “Why we have free speech on university campuses, and why I will never take a call from the Stanford Review again,” rebuking several parts of the article by Cameron and Mitchell.

Palumbo-Liu points out a line between free speech and academic freedom and says that those on the “alt-right” merely use campus groups and the perception of free speech to gain attention for themselves, that they could care less about protecting free speech.

Palumbo-Liu then struck down the piece for having what he claims to be a “sensationalist” headline like those of a tabloid magazine. He went on to further degrade it as “right-wing propaganda” and “classic yellow journalism.”

He also tackles the Review labeling him as a leader of the Antifa movement, which he says has no leader because that wouldn’t make sense in an anarchist group, and voices his discontent with the Review comparing his organization to Antifa just because they share very similar names.

The Stanford College Republicans also took this as another opportunity to speak out against Palumbo-Liu, saying in a facebook statement that he “lashed out at the students that exposed him” and that he “laughably” slandered them as being members of the alt-right. Also in the post, the Stanford College Republicans reiterate their call for Palumbo-Liu’s immediate resignation.

The Stanford Review Editorial Board also put out a response to Palumbo-Liu’s rebuttal titled “If It Quacks Like a Duck…The Stanford Review Responds to David Palumbo-Liu.” It states that Palumbo-Liu relied on “picky semantics” instead of addressing the substance of their points and that he underhandedly slighted them as alt-right.

“Let’s remember the facts here. A professor founds a campus group with a name almost identical to a national movement that has been classified by the government as a domestic terrorist organization and identified by most Americans as a group of club-wielding thugs. He defends himself by claiming that his organization has a slightly different name. He fails to roundly condemn the domestic terrorism antifa members have perpetrated against peaceful citizens. And yet, he is angry at us for pointing out that his actions could be misconstrued as reflecting a preference for violent protest over the peaceful dissent and debate that Stanford stands for,” the editorial states.