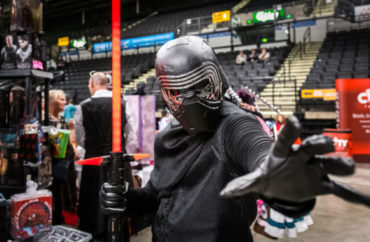 We know it’s a spoof – but please resubmit it

Desperate to publish your dreck in a peer-reviewed science journal? One anonymous academic has narrowed your list of plausible candidates for submission.

Known only as “Neuroskeptic” and blogger for science magazine Discover and the neuroscience section of the Public Library of Science, the blogger wrote an “obviously absurd paper” that translated a plotline from Star Wars into medical jargon and submitted it to several journals.

Anyone reading closely would have realized it was a joke: The paper was submitted under the names “Lucas McGeorge” and “Annette Kim.”

Yet a plurality accepted the paper – and one journal asked Neuroskeptic to resubmit even after the peer reviewers acknowledged it was a Star Wars spoof.

Neuroskeptic writes about the sting in Discover, saying it was intended to publicly identify so-called predatory journals that charge hefty sums for submissions but will publish low-quality research:

The manuscript is an absurd mess of factual errors, plagiarism and movie quotes. …

I created a spoof manuscript about “midi-chlorians” – the fictional entities which live inside cells and give Jedi their powers in Star Wars. I filled it with other references to the galaxy far, far away …

Among the obvious movie references, the paper said midi-chlorians live in all cells, they provide “knowledge of the force” and their disorders cause autism. Another one: “Involved in ATP production is the citric acid cycle, also referred to as the Kyloren cycle after its discoverer.”

Four out of nine journals accepted the paper, no questions asked, and three of them published it before Neuroskeptic could pay the submission fee; three rejected it; and two asked for revision and resubmission:

At JSM Biochemistry and Molecular Biology (JSciMedCentral) both of the two peer reviewers spotted and seemingly enjoyed the Star Wars spoof, with one commenting that “The authors have neglected to add the following references: Lucas et al., 1977, Palpatine et al., 1980, and Calrissian et al., 1983”. Despite this, the journal asked me to revise and resubmit.

At the Journal of Molecular Biology and Techniques (Elyns Group), the two peer reviewers didn’t seem to get the joke, but recommended some changes such as reverting “midichlorians” back to “mitochondria.”

Finally, I should note that as a bonus, “Dr Lucas McGeorge” was sent an unsolicited invitation to serve on the editorial board of this journal.

Dark side I sense in you? pic.twitter.com/i5henegNbP

The three journals that published the submission have since removed it, but they are cached by Google.

The sting was in some sense revenge for being spammed by “almost all” the journals in the past, Neuroskeptic writes: “All I did, as Lucas McGeorge, was test the quality of the products being advertised.”

To learn the identities of the journals and Neuroskeptic’s methods, read the post.