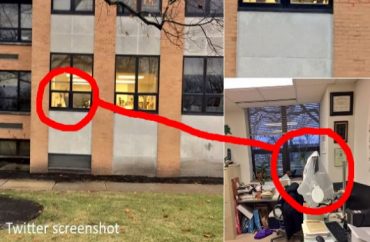 Oops. That’s what a Bowling Green State University student should be saying after she mistakenly and falsely identified a cover for a piece of equipment as a member of the Ku Klux Klan

After seeing a white, pointy figure in a classroom window at Bowling Green State University, a frightened student took to Twitter to post the image and dramatically state there was an “ACTIVE KKK group” at her school.

The student’s tweet, posted on Sunday morning, apparently led to “concern among the student community demanding answers as to how the pointy white sheets made their way onto their hallowed grounds.” It even spurred a campus inquiry, which found there’s no presence of the hate group on campus.

The university’s president, Mary Ellen Mazey, took to Twitter on Monday to debunk the KKK claim:

We looked into this. We discovered it’s a cover on a piece of lab equipment.

Red Alert Politics reports “the student who shared the original video was promptly mocked online for her paranoia.”

Thanks for sharing, @autumpatrice. We looked into this. We discovered it’s a cover on a piece of lab equipment. pic.twitter.com/plkQTBr9HC

Maybe next time she won’t be so quick to take to Twitter.