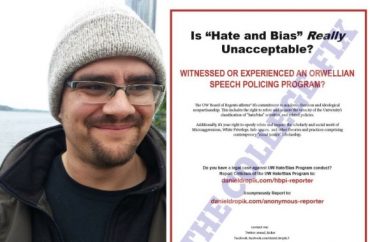 So far, Dropik’s been denied – every single time. The official reason he has received from numerous administrators is that his flyer cannot be posted because it’s “political in nature,” Dropik told The College Fix in an interview.

Yet there’s no mention of politics on Dropik’s flyer. It simply serves as a response to countless administrative messages plastered across the campus that state “Hate and bias is unacceptable at the University of Wisconsin Madison. Witnessed or experienced a bias incident? Report to …”

“I can’t think of a building on campus where I haven’t seen one of those,” Dropik said. “It’s also set up to scroll on TV screens in public areas. I even received a similar email from my department as a student employee. It’s like we are being trained to think a certain way, feel a certain thing, whenever we see the word ‘hate.’” Is “Hate and Bias” Really Unacceptable?
WITNESSED OR EXPERIENCED AN ORWELLIAN SPEECH POLICING PROGRAM?
The UW Board of Regents affirms* it’s commitment to academic freedom and ideological nonpartisanship. This includes the right to refute and inquire the veracity of the University’s classification of “hate/bias” activities, and related policies.
Additionally, it’s your right to openly refute and inquire the scholarly and social merit of Microaggressions, White [Privilege], Safe-spaces, and other theories and practices comprising contemporary “social justice” scholarship.
* University of Wisconsin System Board of Regents’ 2015 Statement Reiterating the Board’s Commitment to Academic Freedom and Affirming its Commitment to Freedom of Expression
Report Criticism of the UW Hate/Bias Program to …
(This publication is in no way affiliated with UW-Madison or The UW Board of Regents.)

Dropik, a computer science major, told The Fix his flyers are somewhat tongue in cheek. His goal, he said, is to elevate the tone of campus discourse by clearing the air of political correctness and engaging with others in honesty and openness.

“Students can disagree about what should be classified as hate and bias. That dialogue is such an important part of good race relations,” he said.

Dropik said prior to posting any of his flyers, he went through the proper channels to follow campus posting policies. Since every campus official denied him permission, his flyers have never seen the light of day at UW-Madison.

“I anticipated that I would encounter resistance to posting the flyer, I didn’t want to get fined, so I always went out of my way to get explicit permission in accordance with the rules,” he said. “My flyer was never taken down, because I never succeeded in getting permission to post it.”

Crackdown on freedom of expression

Students are apparently not free to voice such disagreements at UW-Madison, the state’s flagship university, which just launched a massive and controversial new program called “Our Wisconsin” that aims to crack down on offensive words.

Its architects and coordinators, including Diversity Officer Patrick Sims (who has likened the University of Wisconsin to a “Jim Crow” institution) and “Christian queer” re-education activist Joshua Moon Johnson, insist that it is merely intended to help prevent incidents such as those that occurred at the UW over the past year, such as an impolite war whoop directed at a powwow of Ho-Chunk Indians and a handful of swastikas scrawled around campus. (There is no word on whether the program is also intended to prevent the anti-white, anti-police graffiti which UW student King Shabazz spent nearly a year spraypainting on campus buildings—activities that many in the university supported.)

But Dropik and others say they are not convinced by the UW’s arguments, and worry that the Our Wisconsin program—which encourages students to report on one another anonymously, thus initiating a secret investigation by a “hate and bias incident response” squad—is merely a tactic for further stifling free expression on the Madison campus.

For Dropik, who has tried to engage the university in a conversation about the Our Wisconsin program, the issue of free speech and respectful dialogue is a personal one.

“If UW-Madison is truly concerned about ‘diversity,’” Dropik said, “then why does it value racial diversity more heavily than intellectual diversity? … The dominant practices on campus, influenced by ‘social justice’ theories, do the opposite of liberating free expression for all. They stifle communication, and exacerbate racial tensions by bolstering racial double standards and alarmingly widening the criteria of racial taboo.”

As if determined to prove Dropik right, administrators recently set up separate meetings for white people and students of color in the wake of Black Lives Matter violence across the country. “Institutional acquiescence in these [‘social justice’] theories serves as a force multiplier to these effects,” Dropik said. “My purpose is to lay out criticism of that school of thought, with the intent of cultivating an alternative model which is more harmonious with the values of free speech, and mutual respect, on all sides.”

While the UW speaks constantly of “social justice,” Dropik adds, it is blind to its own blatant indoctrination and promotion of intellectual homogeneity in favor of cosmetic diversity.

“Another serious danger is the ease with which ‘hate and bias’ can be abused to subvert political and ideological opposition, and to institute indoctrination. The balance of the burden is on the accused, and the accuser has no accountability,” Dropik told The Fix.

Dropik is not alone in his concerns. of a program that potentially makes secret informants out of the entire student body. Some UW professors have also voiced their concerns in private, although, perhaps fearful for their jobs, none have yet dared speak out in public.

Dropik’s aim, though, is to help other students articulate their concerns openly.

“My goal is to channel those frustrations into a coherent, legitimate intellectual and political activist movement. I am experiencing resistance as I do this,” he said. “We also have libertarians and conservatives who oppose the program, but they grapple with the fear of being mistakenly perceived as ‘racists.’”

“In other words, I know for sure that students are already self-censoring.”

Asked to weigh in on the situation, a campus spokesman told The College Fix he was unaware of Dropik’s situation. Officials with the computer science department, Dropik’s home department, did not respond to requests seeking comment.

As of this writing, it appears to remain impossible for UW students to post flyers criticizing the very program that encourages them secretly to criticize one another.

College Fix contributor Dr. Jason Morgan holds a PhD in history from the University of Wisconsin. He is a research fellow at the Japan Forum for Strategic Studies, and has written for Crisis, Chronicles, American Thinker, Mises Wire, The Remnant, Modern Age, Ethika Politika, and the New Oxford Review. His new book, Amerika ha naze Nihon wo miorosu no ka?, is available from Wani Books in Japan.