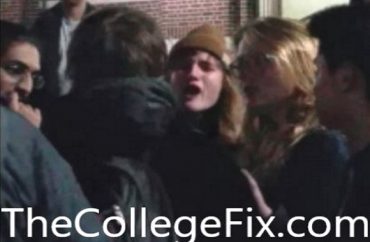 In the wake of Donald Trump’s unprecedented rout of Hillary Clinton in the 2016 presidential election, the best way to describe the University of Michigan’s campus climate on Wednesday in a word: meltdown.

Numerous Facebook statuses from persons of color exhort their fellow minorities to “be safe.” At watch parties all over campus on the night of Nov. 8, people burst into tears at the announcement of the results. The general conclusion by most students on campus is that America has taken a massive step back at least 50 years by elevating Donald Trump to the presidency of the United States. The campus appears to be imploding as a result of Trump’s victory.

So it is not at all surprising that a planned post-election vigil endorsed by the university was host to a contentious argument that sparked up on the quad—and nearly ended in a physical altercation between multiple anti-Trump vigil-goers and a seemingly pro-Trump male.

In video obtained by The College Fix, a woman, flanked by multiple sympathizers, can be heard saying that “America is an empire that is on its way down, and people are upset about that, so they want to go back to the way it used to be. Newsflash: That’s never gonna happen!”

The male student insists that his vote was not about maintaining an “empire,” but he is quickly shouted down by the crowd.

“Do you know what happens when you raise the minimum wage?” the man can be heard asking. “You lay off a ton of workers.”

When the subject turns to the national debt, a woman yells out “Since when is Donald Trump gonna get us out of debt? He has bankrupted himself like six times.”

A woman near the rear of the crowd suddenly says, “We can’t even argue with him anymore.” She then bursts into tears and is quickly comforted by a male friend to her immediate left. The pro-Trump male moves forward to comfort her — “I’m sorry” — and the woman sobs: “You voted for a rapist!”

As he tries to explain his vote, she yells out between sobs, “I just didn’t want a rapist to be my president, okay, I just wanted someone who [doesn’t] hate my friends.”

Another girl aggressively shouts in the man’s face, “That’s not the same thing!” and tells him to leave. The crying girl, as the man apologizes, insists that “none of this pain would happen” if Hillary Clinton had won the presidency. “No one would be this afraid.”

The female advances threateningly and says “I’m gonna slap your fucking face.” The man challenges her: “Do it! Because that’s assault.” She moves to strike, but the crowd breaks up the would-be altercation.

Earlier in the rally, hundreds of students angrily chanted “Not. My. President.” And at a rally put on the by the socialist club on campus, a participant held a flag defaced with the words “Abolish America” spray painted on it.