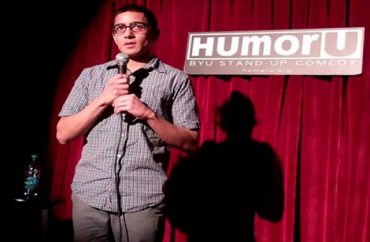 Writing in American University’s Eagle, Julia Gagnon argues that even if speech is not a direct threat, it still could be … well, a threat.

Gagnon criticizes the notion of “punching down” — comedy that “leaves a bad taste in your mouth and on the edge of your seat watching for the nearest exit.”

More specifically, it’s that which makes “a joke at the expense of someone who holds less privilege” (invoking a modicum of critical race theory), or demeans “sensitive” topics like sexual assault.

Ironically, she uses Chris Rock as an example of how comedy should be done (and Donald Trump(!) as the reverse) — specifically, his jokes about racism in Hollywood during this year’s Academy Awards:

Comedy is supposed to make the audience uncomfortable enough to realize something about themselves or the world. When Chris Rock hosted the Oscars, he used his comedy to create a social commentary about the blatant racism that pervades Hollywood. It made the audience uncomfortable in way that forced them to confront their own privilege and didn’t allow them to hide behind their status or their good intentions.

MORE: This is why Chris Rock refuses to do standup on college campuses

Comedy, however, is often misused by those who view it as a cheap way to batter the opponent. On Monday night, we saw this strategy in full effect during the presidential debate. Donald Trump’s dismissal of Hillary Clinton’s accomplishments translated into verbal shutdowns when she tried to speak. He made comments regarding whether she had enough stamina or the correct presidential appearance, which offered no actual insight into her qualifications as president. This verbal battering from Trump is not a new part of his rhetoric and has pioneered a more protected path for the perpetuation of hate speech.

But … Rock has stopped performing at college campuses precisely because of people like Gagnon:

“[…] their willingness not to offend anybody. Kids raised on a culture of ‘We’re not going to keep score in the game because we don’t want anybody to lose.’ Or just ignoring race to a fault. You can’t say ‘the black kid over there.’ No, it’s ‘the guy with the red shoes.’ You can’t even be offensive on your way to being inoffensive.”

Rock’s very performance from this year’s Oscars, which Gagnon uses as a “correct” example, was castigated by a San Diego State student shortly after the show. Rock had — gasp! — invoked a stereotype about Asians, and well, how dare he:

“The worst part is: people laughed. The audience, the viewers, producers and Rock himself, reveled in their own conscious approach to black exclusion from the arts, and yet targeted a minority that is often perceived as being ‘submissive’ and ‘obedient.’”

Gagnon concludes her piece by saying “If you use violent speech, such as […] commenting on someone else’s physical characteristics, then you are part of the problem […]

“Your words matter. If you try to combat hate with hate, you will only create war.”

Yes, but that “war” sure was gut-bustingly funny when Eddie Murphy took on Dave Chappelle in “The Nutty Professor” (language warning):