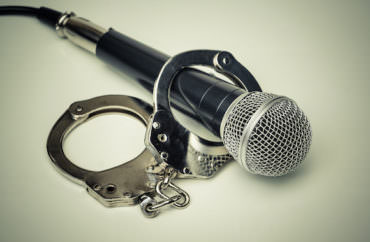 The University of Minnesota-Morris has threatened a student radio show with cancellation after one of the hosts used the word “tranny” on-air, with campus officials offering several shifting reasons for pulling the show from the airwaves. The College Fix has obtained exclusive video of the moment when the students were pulled from the air during the middle of their show.

“Deplorable Radio” is a weekly show on KUMM hosted by students Brandon Albrecht and Tayler Lehmann. Albrecht told The College Fix in an email that the programming is “a mix of politics, music, and some random musings about current events locally and around the world.”

The duo was notified of the cancellation two weeks ago after Albrecht used a controversial word on-air to refer to transgender individuals.

During a discussion about the university’s lack of “Antifa” violence, Albrecht said the campus was too small for a potential violent activist to hide his identity.

“You know, you can definitely, you see one tranny that’s trying to punch someone,” Albrecht told The Fix he said on-air. “You know it’s automatically that one guy that you know I’m talking about. I bet you know. I’m not going to dox anybody and name them on air. But you two know if I say the tranny who looks like he’s going to punch someone. Yep.”

“About fifteen minutes later,” Albrecht told The Fix, “the student station manager came into the studio with a UMMPD officer and told us to leave. She said we had violated FCC law by saying a word that was never allowed on air, ‘tranny.’ So we packed up and left the studio.”

See a video recording of this moment here:

“Hey guys, I am just going to have you leave. You said a couple words that break FCC violations,” the manager says, according to the video, which appears to be lightly edited for time. “And so for today I am going to have you stop your show. Specifically tranny. That is a hate slur it is not allowed on radio. I need you to leave.”

As she says these words, a campus police officer stands in the background, the video shows.

“Did you really have to call the police?” the students ask.

“It’s a violation, you are breaking the law,” she continued. “I just need to enter a report. …”

“That is a specific hate speech word never allowed on radio,” she tells the students as they pack up, “in the same way that you can never say ‘cocksucker’ on radio.”

A week after the suspension of the show, Albrecht said, the university radio station summoned him and Lehmann for an executive board meeting, along with its faculty adviser. According to Albrecht, they told the radio hosts that they “were permanently suspended from the radio by executive decision.”

Board members said they had “received complaints about our show and threats to file a report to the FCC, which could end up costing the station (which is a University-funded organization) thousands of dollars.”

Albrecht told The Fix that the board openly admitted that the hosts had not in fact broken FCC rules by saying the word “tranny.” The board, however, claimed that they had “received complaints the week before that said [Albrecht and Lehmann] sounded like [they] were under the influence, which is an FCC violation.”

The board “asked us to voluntarily resign from the club,” Albrecht said, “or else they would bring it to a vote for the entire club to kick us out.”

Albrecht said that the allegation that he and Lehmann broadcast while intoxicated is false, and that they were “100% sober.”

According to First Amendment and media lawyer Bob Corn-Revere, the board’s assertions regarding federal communication laws are false. “The officials are wrong,” Corn-Revere told The Fix via email. “Neither [saying the word ‘tranny’ nor broadcasting while under the influence] is a violation of FCC rules.”

The FCC specifically refused to deny an application for a new FM broadcast station in 2008, in response to a public complaint that the applicant had been “under the influence of alcohol” while on air at a different station.

The commission told the person who complained that he “cites no specific rule violations”:

His bare statement that because the counties surrounding Jasper are “dry,” and thus on-air intoxication “violates community standards for decent behavior,” is insufficient to raise a substantial and material issue of fact regarding [the applicant’s] qualifications.

Late Wednesday, Albrecht received an email from the radio station manager that pulled back slightly on its allegations.

“Upon further consultation with University officials, we have come to the conclusion that our language concerns have been determined to not be in violation of FCC community standards.”

The manager, however, cited a new set of alleged violations by Albrecht and Lehmann, such as “not playing at least 2 new songs per hour.”

Albrecht believes his show was subject to a double standard because “other shows do not follow every station rule either and they are still on the air.” He told The Fix that “had it not been for our language,” the show wouldn’t have been suspended.

Asked if the university had suspended the radio show over the word “tranny,” spokesperson Melissa Vangsness told The Fix in an email: “The situation the radio station is dealing with relates to compliance with DJ expectations and station standards.”

Albrecht said that he and Lehmann refuse to resign and want to “go out with a bang and make the executive staff hold a ridiculous vote for the whole station to kick us out for saying ‘tranny.’”

“It is a shame,” Albrecht wrote, “that our freedom of speech is being curtailed today in the very place it should be most free, on college campuses.”

UPDATE: The university provided The Fix with a statement after this article was published. It has been added to the article.