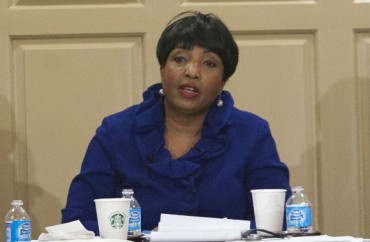 Petition calls for Carol Swain’s suspension, student lobbies advertisers on her personal website to pull out

A student involved in LGBT activism was so incensed by a controversial professor at Vanderbilt University that he threatened to ruin her if she didn’t censor her own political opinions outside of class.

Law Prof. Carol Swain, a vocal black conservative on campus who is now on sabbatical, didn’t budge and is now claiming that the student, Nicholas Goldbach, violated the law by interfering in her business relationships.

In an interview with The College Fix, the tenured professor said Vanderbilt has not supported her as she endured verbal abuse from students. Swain added that she is now considering using a police escort when she returns to campus in January.

Swain has been highly critical of political Islam and LGBT activism in her writing for her commentary website and other outlets, including her Facebook page, which has more than 18,000 likes.

She wrote in The Tennessean after the Charlie Hebdo massacre that there should be “serious monitoring of Islamic organizations.”

Articles ‘should be redacted’ or we’ll get you fired

Goldbach reached out to Swain on Facebook Nov. 7, saying he had recently seen articles she had written full of “hate speech,” according to a copy of the exchange Swain provided to The Fix.

“Being a student at Vanderbilt, I find it unacceptable that part of my tuition finds its way into your paycheck every year, when you actively use your Vanderbilt title here (Professor) to promote so many hurtful opinions on a public media page,” Goldbach wrote to Swain. The professor’s articles “against LGBT individuals, the Islamic and/or Muslim communities, and any other minority group, should be redacted or edited,” Goldbach added.

Claiming that Swain’s expressed views “are in clear violation of non-discrimination clauses at our university,” Goldbach said he and his peers would send a petition to Chancellor Nicholas Zeppos demanding “your release from employment” at Vanderbilt unless she redacted her prior writing.

“I sincerely hope that you will change the way you channel your opinions in the future,” Goldbach said. Swain responded the next day, Nov. 8, saying no one has to read her writing or take her classes. That same day, a petition was posted on Change.org by a group calling itself “Vanderbilt Students” that mirrors some of Goldbach’s points in the chat. It’s directed to Chancellor Zeppos and Associate Provost Mark Bandas, who responded to the community in the wake of Swain’s Charlie Hebdo op-ed.

Initially calling for Swain’s “suspension,” it was revised three days later to demand her “temporary” suspension while she’s investigated for “allegations of unprofessional intimidation on social media, discriminatory practices in the classroom, and unclear representation” (identifying herself on Facebook as “Professor” Swain).

The petition, which also calls for mandatory “diversity training” for faculty, currently has more than 1,600 signatures and points to Swain’s op-ed as an example of her “bigotry” and “intolerance.”

Stop funding Swain or you’re next

Goldbach also tried to get advertisers on Swain’s Be the People website to pull their sponsorship, according to an email Swain shared with The Fix.

Churchill Mortgage should “part ways with her socially and politically unacceptable remarks before the next stage of our campaign goes public,” according to Goldbach’s Nov. 9 email to the company. Swain said the company shared the email with her.

The email claims that Goldbach’s group has been “contacting every sponsor” of the site and found that “most” were “anxious to distance themselves from her message.” It said any remaining sponsors would be hit with the group’s next petition. Goldbach told The Fix in an email that while he is the “de facto publisher” of the petition and he “contributed” to it, “it is not my petition” but “the community’s petition.” He didn’t comment on the email to Churchill Mortgage.

Swain has violated Vanderbilt’s acceptable use policy again by sharing Goldbach’s Facebook chat with The Fix, Goldbach said. He asked The Fix to give Swain “the opportunity to revise her earlier statements … as a personal courtesy” to her. (The Change.org petition asks Vanderbilt to suspend Swain before she “causes more harm to herself” as well as the school.)

None of her advertisers has pulled its sponsorship, contrary to the implication in Goldbach’s email to Churchill Mortgage, Swain said.

“They all got on the same email thread and talked amongst themselves and realized that no one was pulling out,” Swain said. (Goldbach’s email does not explicitly claim any advertiser had pulled out.)

Swain said on Facebook Wednesday that Goldbach had apologized to her, though the Change.org petition remains live.  Goldbach did not respond to a Fix request to confirm whether he indeed had apologized.

I am a supporter of ALL human rights, not just those of BIGOTS. #humanrights #SuspendSwain #StopTheHate https://t.co/dSaBtNc0m4

A Vanderbilt alum who is now a Rutgers grad student has also spearheaded a letter-writing campaign against Swain, telling The Vanderbilt Hustler that “the consequences of her speech are damaging.” (A student in Los Angeles just launched a counter-petition with Swain’s blessing.)

‘I felt so wounded’

Swain told The Fix she was hurt by how Vanderbilt had created an environment where students think it’s OK to “harass me and talk to me like I was the kitchen help” because of her views on Islam.

She said she never received Bandas’ email to the community, the contents of which said that Vanderbilt supports free speech and encouraging students to “engage in dialogue … particularly those with whom you disagree.” Two of her students told her, Swain said.

Vanderbilt “pushed me to the point I thought about resigning,” she said when asked if she planned to resign amid the pressure.

“I couldn’t imagine at one point ever returning to Vanderbilt, I felt so wounded. But I got over that and I’m ready to return” in January, Swain said, though she’s mulling whether to request a full-time police escort for her safety.

Swain’s writings, which she says are intended for like-minded readers outside Vanderbilt, don’t seem to be keeping students away. Her American Political Culture class set for the spring is 95 percent full already, according to the university’s enrollment system.

She said she would like to set up debate forums on campus where opposing speakers can show students that intelligent people can hold views at odds with each other.

One of Swain’s former students credits the professor with keeping him from dropping out as he suffered through poor grades, depression and family strife.

“The picture that many people paint of Carol Swain – that she’s a bigot, that she doesn’t care – is not the Carol Swain I know,” Octavio Edgington told The Fix: Swain helped him academically and had her church congregation pray for him.

Swain said that as a Christian “I think God has called me and equipped me to be bold.”

UPDATE: The article has been amended to clarify that Goldbach is involved in LGBT activism, not that he necessarily identifies as LGBT. Goldbach has made his Facebook profile private since this article was published, so a screenshot of his self portrait has been added.