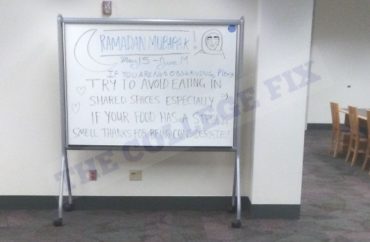 A whiteboard message at Oregon State University’s library asks students to try to avoid eating foods, especially smelly foods, in shared spaces to be considerate of those who are observing Ramadan.

The Muslim holy month this year runs from about May 15 to June 14. During this period, Muslims are obligated to fast from dawn until sunset. Presumably, the sign was made to encourage non-observers to not eat foods with strong smells because it would make Muslim students’ hunger worse, or that it might be disrespectful.

“Ramadan Mubarak! Try to avoid eating in shared spaces especially if your food has a strong smell,” the message said. “Thanks for being considerate!”

In addition, the University Housing and Dining Services at Oregon State is also making concessions for those observing Ramadan. Many dining halls on campus extended their dining hours later into the night to around 9:30 or 10:00 p.m., past their 8 p.m. normal closing time, to give observers more places to eat after the sun goes down, according to The Daily Barometer. The dining halls will still open at their normal opening time of 7 a.m.

Of the roughly 24,000-plus students at Oregon State, the Muslim population on campus is around 1,500, according to Mohammad Shakibnia, the public relations and outreach officer for the Muslim Student Association, in an interview with The Daily Barometer.

The Muslim Student Association declined to comment to The College Fix.

The College Fix made multiple attempts to reach out to university chief spokesman Steve Clark but did not get a response in time for the publication of this article.

It is not unheard of for a university to work with Muslim students during this time.

During last year’s Ramadan, three University of Washington professors offered special exam times for those observing the tradition. The professors held their tests later at night to give the observers a chance to eat before taking their tests.