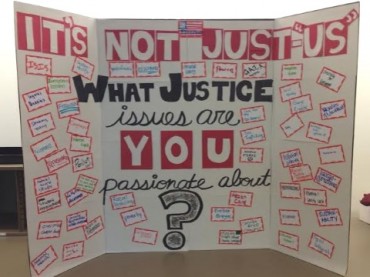 A back-to-school interactive project at Loyola University Chicago asking students to weigh in on what they are most worried about today found students are far more concerned with liberal issues such as climate change and misogyny than they are with more traditional matters, such as liberty and privacy.

Loyola’s student government had set up a large poster on campus last week, asking students to weigh in their most pressing justice matters.

“Poverty,” “climate change,” “Gaza,” “misogyny,” (a related one reads “the fact that it is 2014 and I STILL get paid more than a woman”), and even “food waste” all made an appearance on the wall.

The epitome of liberal doublespeak was present, too: a sticker reading “respecting people’s lifestyle choices … tolerance!” was next to one that read “smoke free campus.”

Other words included: “Acceptance,” “pollution,” “gay rights,” “homelessness,” immigration,” “big oil lobbyists” and other left-leaning words and causes, all dominating the poster board.

With notable exception, “ISIS,” “freedom,” and “liberty” were the only thee standouts among the 53 placards. The word “privacy” didn’t even make the list, even after it’s been recently revealed that the government has access to Americans’ personal and private emails and social media threads in violation of the Fourth Amendment.

The few conservative values on a board with dozens of other liberal values, issues and priorities tangibly shows the lopsided priorities of students and their educators at contemporary universities. The results would likely have been mimicked on any campus across the country.

A recent UCLA survey found that 62 percent of full-time faculty at four-year colleges and universities identify as liberal or far left. Self-identified conservative and far right professors make up just 12 percent of faculties nationwide. The rest identify as middle of the road. As for students, 20 percent don’t believe it’s safe to hold unpopular views on campus.

Conservatives are stuck between a hostile faculty and Borg-like students with nowhere to go.

If you speak your mind, you are shouted down and labeled a hater. If you are the trifecta symbol of “oppression” or “privilege” – that is white, straight, and male (and not willing to check your privilege) – then you are called a racist, as I was. Liberals never tire of castigating those outside their own mindset. As for the poster, not only are a lot of the concerns labeled on it non-issues in the first place – in what world are “climate change” and “cultural awareness” justice issues? – they all need top-down government to “fix” them.

To liberals, things like acceptance, poverty, sustainability, congruency (what?), and the age-old enemy of mankind that are cigarettes require a proactive, activist government to force conformity, all in the pursuit of a “just” society.

Beyond that, the issues are strawmen arguments and betray the liberal impulse that they own morality, that conservatives are evil, and if you don’t agree you are anathema.

Who honestly believes that poverty shouldn’t be addressed? Or immigration reform? Or the homeless population? No conservative I know is opposed to finding solutions for those issues.

Nonetheless, when you own morality, everything and everyone who doesn’t agree with you must be evil. Not just wrong – evil.

Campus conservatives are in a lose-lose environment. It’s a miracle ISIS made it on the poster in the first place.

If ever a photo captured the ideological divide in college, the image of this poster at my campus is it. And if a photo speaks a thousand words, this one must fill volumes.