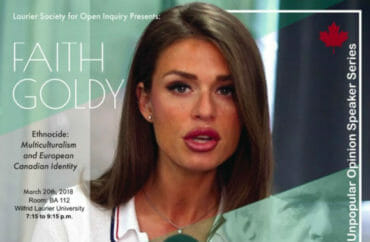 Administrators at Wilfrid Laurier University may have stopped feuding with the graduate student instructor they investigated for showing a gender-neutral pronoun debate in class, but other members of the Canadian institution have not.

Vandals tore down flyers for an event sponsored by Lindsay Shepherd’s free-speech group and replaced them with flyers promoting popular progressive slogans.

While the administration defended Laurier Students for Open Inquiry’s decision to invite journalist Faith Goldy, a self-described Catholic nationalist and alleged alt-right sympathizer, it has yet to explain how professors can unilaterally cancel class sessions.

I hear @Laurier soypremacists have taken to tearing down posters advertising my talk this Tuesday 😂
Would be a shame if folks retweeted it… pic.twitter.com/YCfaUink8n

Shepherd told The College Fix in an email that the Goldy event, scheduled for Tuesday night, was initially devised as a “debate about immigration and multiculturalism in Canada.”

In early discussions among Laurier Students for Open Inquiry, Goldy was “confirmed as the anti-open borders/pro-Euro-Canadian identity side” after a group member found her to be a “strong, articulate, but polemic speaker,” according to Shepherd, the group’s president.

The student group invited “numerous professors who research immigration policy and advocate for open borders” to participate in a debate, she said: “All declined.”

Those professors “seem to have absorbed the idea of ‘guilt by association’ if they were to appear on a stage with Faith Goldy, even though they’d be directly confronting her views,” Shepherd said. She didn’t answer a followup request to identify those professors.

The failure to get others to debate Goldy led the student group to “initiate an ‘Unpopular Opinion Speakers Series’ instead,” Shepherd said. Students at Williams College started a similar event series called “Uncomfortable Learning” that sought out speakers whose viewpoints put them at odds with mainstream campus thought.

Shepherd told The Fix that posters put up Thursday to advertise the event were taken down by Friday. They were replaced by printouts that read “Black Lives Matter,” “Indigenous Lives Matter,” “Lives with Disabilities Matter” and similar constructions for groups considered marginalized. It ended with “We Matter,” a slight variation of the controversial “All Lives Matter.”

The posters of you were taken down, but in all the same spots are these new posters… pic.twitter.com/zvPH5hQDhE

The hashtag #NoNazisatLaurier is being used by students tweeting their outrage for WLU allowing the “neo-Nazi” Goldy on campus. Opponents are holding a “Counter Demo and Performance Rally” shortly before Goldy’s event starts.

“We still want [Goldy’s] views to be engaged with and challenged,” Shepherd told The Fix, “so there will of course be an open floor Q&A at the end.”

Speaking on the backlash from WLU students, Shepherd said “many detractors claim that ‘open inquiry’ or ‘free speech’ clubs are front groups for alt-right ideas/Nazism/white supremacy, it couldn’t be further from the truth.”

She said there was “much diversity of opinion” in her student group, “but ultimately we all agree that airing out unpopular opinions is beneficial to society.”

Honestly @Laurier just doesnt care about their racialized students, their trans and queer students, any of us. Freedom of speech is not a pass for blatant racism, or transphobia like whats been allowed recently. Your students deserve better. #DoBetterLaurier #NoNazisAtLaurier

In a statement seemingly timed to respond to criticism of the Goldy event, the administration explained why it “permits controversial speakers on its campuses” and “does not limit the peaceful and lawful expression of ideas.”

Because WLU “upholds the principle of freedom of expression, which amplifies diverse voices and broadens the points of view that informs our ideas,”  there may be “speakers who come to the university and topics presented at the university that are complex, difficult, and polarizing,” it said.

Students should not understand the university’s permissive attitude toward speakers as an indication that “the university, or all members of the university community, endorse the views they are expressing.”

In the same vein as Brown University, which once provided students a room with Play-Doh and coloring books in response to a campus debate on sexual assault, WLU invited students and faculty to request information about “drop-in spaces and supports” that are being offered during the Goldy event.

The administration “encourages” community members to “allow these debates to take place in a manner that is free of disruption,” it concluded.

If your booking policy allows a white supremacist to come speak on campus then it’s time to throw those policies out the window and start over. @Laurier @PresMacLatchy @DeanLeanne @Lauriergrad #DoBetter #NoNazisAtLaurier

Shepherd told The Fix she was “pleasantly surprised” by WLU’s statement and said it was “absolutely fair” for the administration to say it doesn’t endorse the views of invited speakers. She said her own group held a vote on whether to “go forward” with Goldy as the sole speaker, because “not all LSOI executives were okay with the event.”

The Students’ Union also seemed eager to distance itself from the event, tweeting that Laurier Students for Open inquiry is “not a Students’ Union sanctioned club” and it “receives[s] no funding or support from the SU.”

The administration did not respond to inquiries from The Fix regarding the procedures for events hosted by non-recognized student groups, and what privileges or problems they may face.

Last summer Ryerson University shut down a planned event, “The Stifling of Free Speech on University Campuses,” that featured Goldy and Canadian academics that crusade for free speech, including the University of Toronto’s Jordan Peterson, Concordia University’s Gad Saad and Ryerson’s Oren Amitay.

Goldy was fired by Rebel Media, where she hosted a popular show, days before the scheduled event because she appeared on a podcast associated with neo-Nazis.

@DeanLeanne @PresMacLatchy It is completely and utterly disgusting the way that our school has allowed events like this to take place regardless of the countless meetings we’ve had with upper administration. I am ashamed to go to Laurier. #NoNazisAtLaurier

Professor: Let the diversity office shut down any event it dislikes

Some faculty aren’t thrilled with students inviting an alleged neo-Nazi on campus, either.

While Shepherd told The Fix she received a “couple emails” from faculty praising the Unpopular Opinion series as a “great idea,” she tweeted that her supervising professor canceled a weekly meeting of teaching assistants that included Shepherd.

A screenshot from the professor’s message reads: “A student group has invited white supremacist and neo-Nazi supporter Faith Goldy” to campus, and with demonstrations planned, “I want to ensure that you will have the option to stay off campus if you wish.”

Shepherd tweeted that the professor “clearly knows” she leads the group that invited Goldy.

An email from my supervising prof (who clearly knows I am the President of said 'student group', LSOI) cancelling our weekly TA meeting tomorrow.

Another professor published an open letter to WLU President Deborah MacLatchy and Faculty Association President Michele Kramer, accusing the administration of harming faculty and choking off a “diverse range of applicants” by not shutting down the Goldy event.

Steve Wilcox, who teaches game design and development, said the point of the Unpopular Opinion series was bringing “bigoted views” to campus. He condemned Goldy as a “white supremacist” who will use her platform at WLU to “promote discrimination and hate against marginalized persons.”

Letting Goldy speak is not “controversial,” as the administration claims, but “abhorrent and has no place on our campus,” Wilcox wrote in his Medium post. It’s “crucial” that the Faculty Association and administrators “recognize how the university and their views on free speech and academic freedom have been co-opted to intimidate marginalized students and foster a culture of race-based hate and violence.”

It is “simply wrong” for administrators to “offload the task of decrying these hateful views to faculty, staff and students,” said Wilcox, whose research includes social justice. He went so far as to demand that the Diversity and Equity office evaluate the “pedagogical purpose” of any proposed campus talk, and shut down any that “contravenes” its views.

Another professor had a negative reaction to Shepherd’s activities, in a move that affected the entire class.

After tweeting a screenshot of a conversation with her mother about an incident in class, Shepherd tweeted “my prof cancelled class for the rest of the semester” because of that previous tweet: “Ridiculous.”

In response to her comments on “personal responsibility,” according to Shepherd, a classmate allegedly said “the prison system is based in white heterosexual society.” Soon after the “class dissolve[d] into chaos,” Shepherd told her mother.

Using the initialism for “postmodern neo-Marxist,” her mother then mocked the “fragile virtue-signaling P-M N-M snowflakes” who “maybe” believe in personal responsibility “only for white males.” Shepherd tweeted that her mother is “100x cooler than me.”

Texts with my mom. She is 100x cooler than me

In her subsequent tweet, Shepherd wrote: “If my classmates think their views are defensible, they won’t have a problem being (anonymously) quoted on them.”

She explained on Twitter that there were three class sessions left in the semester, all reserved for presentations, “but now we will be presenting in time slots alone with the professor.”

When asked whether the professor cited her tweet as the rationale for canceling remaining classes, she tweeted “Of course not. Just ‘latest developments.’”

Along with the cancellation, the professor sent “another email that linked to data about overrepresentation of indigenous people in the prison system,” she wrote.

WLU did not respond to additional phone and email inquiries from The Fix regarding the justification for the cancellation of Shepherd’s classes. Shepherd declined to identify both this professor and those professors she said refused to debate Goldy in the event’s original format.

There is an actual Neo-Nazi coming to speak at Laurier. This is also the same university that has created what they are calling a "Free Speech Task Force". I guess it's only a matter of time before we go back to our roots and call KW area Berlin again. #NoNazisAtLaurier

UPDATE: After this article was published, Lindsay Shepherd responded to Fix requests to identify her professor who canceled classes and the professors who refused to debate Faith Goldy in the event’s original format. She declined to name them all.