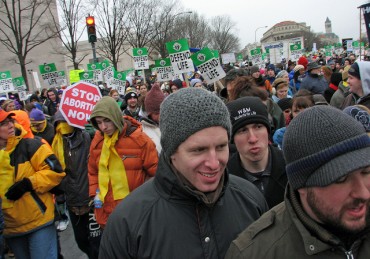 WASHINGTON, D.C. – The revolution will not be televised.

That, at least, seemed to be the message of the most recent March for Life, held Friday, Jan. 25, in Washington, D.C.

Between 500,000 and 600,000 gathered in the nation’s capital for the annual protest, likely making it the biggest year in the event’s history. And yet, on the mile-long route from the National Mall to the steps of the Supreme Court, the only news camera visible was from the Catholic network, EWTN.

Event organizers are used to the media blackout. The March brought approximately as many people to Washington as President Obama’s second inauguration, held just four days before—but only one event received 24 hours of wall-to-wall coverage. As a friend in attendance observed, “If we were protesting anything else…”

She’s right. In its 40-year history, the March for Life has become the world’s largest civil protest—and is met annually with almost complete radio silence. 20,000 attended the first March in January 1974, led by Nellie Gray, a D.C.-area attorney, in response to the U.S. Supreme Court’s infamous Roe v. Wade decision (which, decided 40 years ago last week, has since led to 55 million abortions). Four decades in, unless you’re already connected to pro-life circles, you likely would not know the March is happening.

Still, March for Life is managing to get its message out. The protest march along Constitution Avenue is preceded by a rally, which annually features a number of pro-life legislators and other activists, among them this year Kentucky senator Rand Paul and former Pennsylvania senator and Republican presidential contender Rick Santorum. Protestant churches and Catholic dioceses, Orthodox congregations, high schools, colleges, and a host of civic organizations from across the country brought contingents by car, bus, and plane: Portland, Maine; Evansville, Indiana; Fort Worth, Texas—even a large group from Ireland crossed the pond to participate. Joining in spirit was Pope Benedict XVI, who tweeted his support.

And it’s not an old crowd. Given the number of high school and college students in attendance, the median age likely hovers around 30—if it is that high. A 2012 Gallup poll showed that 50 percent of Americans self-identify as “pro-life,” while only 41 percent self-identify as “pro-choice.” But more to the point, Gallup also noted (in 2010) that “Americans aged 18 to 29 are trending more anti-abortion.” While 18-to-29-year-olds were most likely to support legal abortion “under any circumstances” in the first years after Roe v. Wade, they are now more likely than any other demographic group to believe it should be illegal “in all circumstances.”

That does not always make it easier for pro-life students on campus, as Ruben Verastegui, president of Northwest Vista College Students for Life, noted in his speech at the rally. “Sometimes it’s going to feel like you’re alone on campus as a pro-lifer,” he said. “But take a look around you right now.”

And around them pro-life students are finding not only camaraderie but support. The Pro-Life Field Program of Students for Life of America (SFLA) is working to help establish a pro-life group on every college campus in the U.S. SFLA reported 637 active pro-life campus groups as of May 2011, with groups in 48 states. That same year, the SFLA National Conference became the largest pro-life youth conference in the world. A strong pro-life presence on campus is particularly important, says SFLA, given that college-aged women (18-24) obtain 44 percent of all abortions.

The revolution may not be televised, but pro-lifers are confident that it will happen nonetheless. “We are the chosen generation! We will abolish abortion, and we will change history!” said Verastegui. For the 500,000-plus pro-lifers who gathered in D.C., the March was an opportunity to bring a message of love and dignity to the nation’s representatives, chief among them a president who has done more to entrench abortion than any president in living memory. For the youngest marchers, it was a chance to show that the pro-life movement is not a niche cause or a fringe crusade; rather, it is a view of human life gaining traction with an entire generation of Americans.

Shortly after starting to march, a small group of young men began to sing the refrain of “God of this City,” a praise song by Christian musician Chris Tomlin: Greater things have yet to come / Greater things are still to be done in this City, they sang.