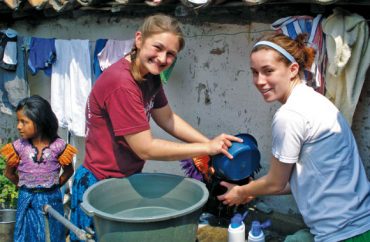 Everyone is ‘2 bad decisions away’ from living on the street

For some college students, “spring break” means relaxing at the beach in places such as Panama City Beach, Virginia Beach or Orlando.

Others decided that refreshing their souls was more important than working on their natural tans.

Many students chose to serve far-flung communities in America and around the world on their semester break, observing and learning about various government systems, economics and technology.

They traveled with school groups or similar organizations, with several trips offered through schools with current or historic Christian affiliations.

One of several East Coast religious colleges that encourage domestic and international trips for spring break is Grove City College.

It offers “inner-city outreach” (ICO) trips in Los Angeles, Philadelphia, Chicago, Ashland (Kentucky) and Tucson (Arizona), and abroad in the Dominican Republic and Guatemala. They are all student-led by one to three individuals, with about 20 trips each year.

Many trips include serving in orphanages, painting schools, doing home repairs, teaching children, participating in Vacation Bible School or working with the homeless or with women’s shelters.

“I talked with so many individuals who had been musicians, worked for the United Nations, worked in a major steel factory, and served in the army,” and now they live on the streets, she told The College Fix in an email.

These conversations showed Baak that everyone is “2 bad decisions away from being right where they are, and I don’t think enough people realize that. Satan is shouting all through the streets of Los Angeles, but God is whispering […] and a whisper is much more intimate than a yell,” she said.

“Our days were filled with work projects such as painting, laying cement, and digging gardens, and playing with the adorable children in the home,” she said in an email. The children played “carpet ball” and loved to color and jump on the trampoline.

“Every person on my team hopped right over the language barrier and connected with the children through actions, smiles, and love,” Hagan said. “It was amazing to see the relationships form and blossom basically overnight.”

Learn from people of faith ‘living on the peripheries’

The College of the Holy Cross gave nearly 300 students the opportunity to serve in different sites, domestic and international.

The Jesuit institution described its faith-based “immersion programs” as intended to “develop a ‘well-educated’ solidarity for our students in the Jesuit tradition.” Its primary focus is “deepening relationships with others and with God.”

Holy Cross senior Kelly McDonald was a part of an 11-student team that went to Ivanhoe, Virginia to do yard work and other tasks that are difficult for the older population to do.

“Living in solidarity with the marginalized is the only way to achieve justice,” she told The Fix in a phone interview. “Personally I think it is good to experience as much of the world as you can.”

Holy Cross says much of the trips is given to working with the community in group reflection and prayer. Its goals are to create community, “expose participants to people of faith living on the peripheries,” explore “structural injustices,” discover “God’s activity” in the visited communities, and encourage students to “continue asking questions” after they return.

The program began in 1976 and include fall break as well as spring. It has offered 12 domestic locations for service projects this academic year, as well as international opportunities in Haiti and Nicaragua in January.

They included trips to Guatemala and the Dominican Republic to study malnutrition and economic issues and provide medical care to communities.

Students in the “Innovation Ecosystems” course traveled to Israel to learn about tech startups in Tel Aviv and Jerusalem. A “Global Management Experience” class headed to Beijing and Hong Kong to visit government leaders and business executives to see how management strategies are applied overseas.

Hundreds of students at BU, which is historically affiliated with the United Methodist Church, volunteered through the university’s Community Service Center’s Alternative Service Breaks program, which was founded in 1988.

It offers dozens of locations across the U.S., Puerto Rico and Canada, where students forsake glamour to work on public health, homelessness and education. There were 30 trips offered during the recently concluded spring break.

Other programs such as Projects Abroad and Rustic Pathways provide opportunities for students to take advantage of an “Alternative Spring Break.” Hillsdale College and the University of Detroit Mercy, among others, also offer service trips across the globe.

EDITOR’S NOTE: The author participated in a Grove City ICO trip in 2016.