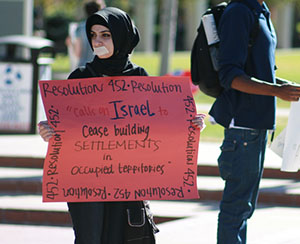 Nobody likes political groups. They are so … political! Can’t we all just get along, by censorship, fines and de-recognition if those pesky words don’t work?

The Students for Justice in Palestine chapter at Loyola University-Chicago got suspended last month after its members blocked a Hillel information table and harassed its members – trying to stop someone else’s speech.

Now, its fellow chapter at Montclair State University found itself on the other side of harassment, this time by its own student government, and the sanctions included a financial hit.

The Foundation for Individual Rights in Education describes the situation the Montclair State chapter found itself in, when the student government’s attorney general told the group it couldn’t hand out pamphlets because “you are a cultural organization and not a political one”:

We have strict rules from the government on how to run the organization while remaining in non-profit status. … Part of the list of things we cannot be associated with is any political or lobbyist organization.

This is a pretty sad statement from someone – an attorney general – who supposedly knows the distinction between what the student government itself may do, and what student groups that receive funds from fees can do. The attorney general’s Web page, which appears to have a previous official’s name on it, reads:

The duty of Attorney General is to provide legal counsel to the government such as determining if an action or bill is constitutional or not. I also have the responsibility to handle any judicial action against a student or organization, as I am the Presidents Chief [sic] law enforcement officer of your Student Government.

The official also “imposed a five percent fine on the group’s fall semester budget as well as an order that the group cease all ‘political propaganda,'” according to FIRE.

MSU and the SGA have created a forum for a diverse collection of student groups with a wide array of viewpoints, and, in light of these and similar precedents, the speech of these groups does not jeopardize either MSU’s or the SGA’s tax-exempt status. …

Fearing that any political speech by a student organization would jeopardize the tax-exempt status of either MSU or the SGA strains credulity. Expressly partisan student groups (e.g., College Democrats, College Republicans, and a host of issue-driven groups) are recognized and funded at tax-exempt colleges and universities (and under tax-exempt student governments) across the country.

The student government’s rationale for the fine – that SJP didn’t get “appropriate stamping” for its pamphlets – is also refuted by its own policies, which “demand only that materials posted at bulletin boards and kiosks be stamped for approval,” FIRE said.

Montclair State’s new university council wrote back to FIRE explaining that the sanctions against SJP had been dropped last week. He attached a letter from the student government president, who weaseled out of any responsibility for terrible legal reasoning in telling SJP the sanctions were dropped:

… we believe that there is an insufficient basis to sanction SJP in such a degree for distribution of the subject pamphlet.

Needless to say, this legal farce is the result of universities imposing the “care ethic” as the overriding principle of higher education, as FIRE President Greg Lukianoff describes in his new book Freedom From Speech. It’s also the corollary of the equally noxious “all comers” policy that’s increasingly taking over schools, including the California State University system, requiring religious groups in particular to let those hostile to their beliefs run for leadership positions.

The Chronicle of Higher Education dives deep into that issue, looking at the legal rationales, the split in the appeals courts, and the Supreme Court’s deeply divided decision that led to the mess that is “all comers.”

CSU’s spokesman told the Chronicle that its approach was “the exact opposite” of attacking a group’s right to speak:

By requiring student groups to admit all students and make them eligible for leadership roles, the university is fostering precisely the environment for debate and discussion that it should. Legally, “we feel very secure in our position on this,” he said.

Actually this policy is legally vulnerable precisely because federal law – the sacrosanct Title IX – exempts fraternities and sororities from all-comers. But there’s a deeper principle at stake that CSU fundamentally misunderstands: The right to speak implies the right not to speak, as well (Fifth Amendment, anyone?).

A group that can’t set its own leadership qualifications that are integral to its very existence – adherence to religious doctrines being perhaps the best example – is essentially forced to speak, to say that its doctrines are optional or secondary. It must testify against itself, to use the Fifth Amendment language, even if that isn’t in a criminal court.

Unpopular views, whether the “political propaganda” of Students for Justice in Palestine or the mandatory celibacy for unmarried student leaders in InterVarsity, are often the victims when regulators try to protect everyone’s feelings.

I’d be more sympathetic if administrators and student officials just baldly stated they want to stamp out certain views, rather than run themselves in legal circles pretending they are protecting free expression.

CLARIFICATION: The attorney general position in Montclair State’s student government is filled by a student who is not necessarily trained in law. The article has been amended to include the official’s duties.

CORRECTION: FIRE’s letter was directed to the university’s president, not its student government, and the new university counsel was responding to the letter in that context. The article has been amended to reflect this.