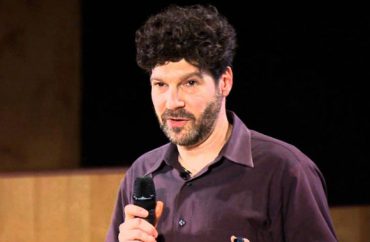 Racism is alive and well at Evergreen State College – and its target is white people who refuse to apologize for being white.

Students at the Washington liberal arts school, whose main claim to fame is alumnus and Simpsons creator Matt Groening, harassed Biology Prof. Bret Weinstein because he refused to leave campus for the annual “Day of Absence” April 12, The Washington Times reports.

Incredibly, they are trying to get him fired.

Evergreen State practices explicit and institutional racial segregation once a year. Typically nonwhite students and faculty leave campus (to show how valuable they are) and the whites stay on campus (to be indoctrinated in “anti-racism workshops and seminars”), but this year it was reversed, and Weinstein told the director of a campus multicultural office that he was staying put.

Bay Area entrepreneur William Treseder posted Bret’s email to the diversity official, which said the requested absence of whites from campus was “a show of force, and an act of oppression in and of itself”:

You may take this letter as a formal protest of this year’s structure, and you may assume I will be on campus during the Day of Absence. … On a college campus, one’s right to speak – or to be – must never be based on skin color.

As an alternative to leaving campus, Weinstein offered to organize a public discussion of “race through a scientific/evolutionary lens,” as long as “people attend with an open mind, and a willingness to act in good faith.”

Protesters decided to raise hell after reading about Weinstein’s refusal to judge people by their race.

They recorded their harassment of Weinstein, apparently thinking they would be applauded for their bravery of surrounding and yelling at a professor (possibly unaware it backfired at Yale).

Weinstein tries to “reason with dozens of students who routinely shout him down, curse at him and demand his resignation,” as captured on video:

“There’s a difference between debate and dialectic,” Mr. Weinstein says in the video.

One student responds, “We don’t care what terms you want to speak on. This is not about you. We are not speaking on terms—on terms of white privilege. This is not a discussion. You have lost that one.” …

Another protester asks the professor whether he believes “black students in sciences are targeted.”

After asking for a clarification, Mr. Weinstein says, “I do not believe that anybody on our faculty, with intent, specially targets students of color.”

That remark draws shrieks of outrage.

MORE: ‘Certain ideas are too dangerous to be heard at Yale‘

Weinstein said the protesters are threatening to dox the students defending him and the school was remaining mum. He also asked President George Bridges, himself surrounded by protesters at one point, for a response.

My students are being singled out for disagreeing with the conventional wisdom. Witch hunt, 2017. @EvergreenStCol is silent on the matter. pic.twitter.com/8LXlV5kRTx

To be clear: the police told me I am not safe on campus. They can not protect me. Students in jeopardy. No contact from admin. George?

Atheist author Sam Harris piled on, accusing the students of cult behavior. (A screenshot of the tweet was posted in the Facebook video comments.)

These kids don't belong at a university. They need cult deprogramming first. https://t.co/vwyxpw6lAr

Student activists are also trying to get the college’s police chief fired because officers are allegedly seeking out and confronting “black trans disabled students” at the college, The Olympian reports.

Unsurprisingly, the administration is encouraging even more disruptive student protests by promising to work with the activists “to address their issues,” saying officials have had “an intense and useful conversation” with them.

Read the Times and Olympian stories.

CORRECTION: Evergreen State’s annual “Day of Absence” is not a mandatory event. Whites were simply asked to leave campus for this year’s event, a contrast to previous years when some nonwhites chose to leave campus to demonstrate the power of their absence. The article has been amended accordingly.