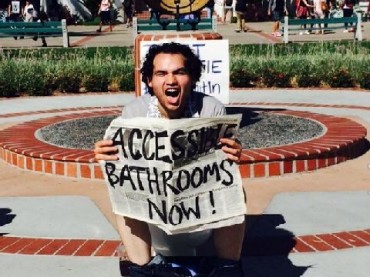 As students walked through the main thoroughfare at San Diego State University on Tuesday they were greeted by students with their pants down sitting atop a row of toilets.

Such an appearance in the middle of a college quad is sure to raise questions, and that was the hope of the Transgender Action Advocacy Student Coalition with their “Shit In” protest.

Five toilets – sometimes adorned with students – set along Campanille Walkway had newspapers with the words “Gender Neutral Bathrooms Now” written in bold letters. Students were encouraged to sit on a toilet and take selfies with the hashtag #SDSUShitIn.

The protest aimed to raise awareness about what some deem is the limited number of gender neutral bathrooms on campus. There are only six specifically gender-neutral bathrooms at SDSU, the protesters told passersby, and one of the six is in a faculty area, so transgender students who are not comfortable in traditional men’s or ladies’ restrooms only have a few options when going to the bathroom.

The protestors handed maps of SDSU with each of the gender-neutral bathroom locations circled to show how the bathrooms are spread around the far ends of campus, in locations that are often inconvenient for trans students to access.

The Transgender Action Advocacy Student Coalition is asking that every building have one bathroom that is gender neutral. The advocates argue that, depending upon class location, trans students have a difficult time making it to one of these bathrooms if they only a 10-minute break between classes. The choice is often between holding the urge and being late to class, they said, adding that having more bathrooms throughout campus would eliminate the need to choose wither of those less-than-pleasant options.

Using either the men’s or women’s bathrooms can be an uncomfortable or even scary experience for a trans person, especially for those still transitioning.

A woman transitioning to becoming a man, Rhodes looked too manly to comfortably go into a women’s restroom, and too feminine to feel safe in a men’s restroom. Many trans people have similar experiences, which is why they prefer gender-neutral options, Rhodes said.

Part of the campaign is also the Gender Neutral Bathroom Challenge, which asks the campus community to avoid using gendered bathrooms for a week. Gendered bathrooms are designated for “men” or “women” by a sign. A follow-up discussion is slated for students to discuss their experiences with the challenge.