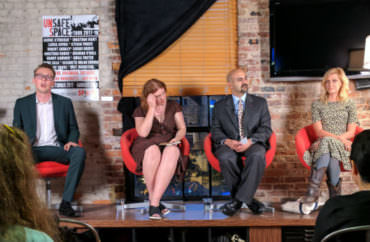 WASHINGTON, DC – Students who enter college today are being taught that every sexual encounter could end with lasting trauma, all because colleges are afraid of losing federal funding, writers who cover Title IX and a due-process expert told a small gathering Thursday night.

It was supposed to be a larger gathering – the first stop on the “Unsafe Space” campus tour sponsored by British online magazine Spiked, hosted at American University.

But when campus administrators yanked the auditorium reservation from the student organizers on short notice, Reason magazine’s D.C. office stepped in, offering a space that could fit only a couple dozen (below).

A few students from American and other local colleges still trickled in. They asked what the Department of Education’s Title IX guidance actually said, how to reduce the emotion on debating sexual-assault remedies, and how campus disciplinary systems could be revised without depriving victims of justice.

Spiked Deputy Editor Tom Slater, who is coordinating the tour, told the audience the organizers had been informed critics of Title IX reform would attend the American University event and ask tough questions.

They were disappointed when the event had to be moved off-campus and those critics didn’t show. “We didn’t want to trade one echo chamber for another,” Slater said, referring to a more sympathetic audience at Reason. 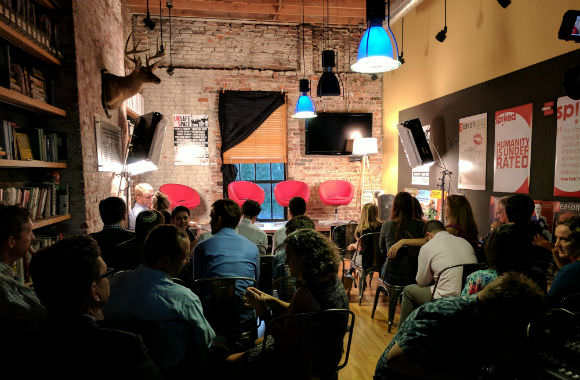 “Their every move with the opposite sex is subject to scrutiny” by administrators, she said: “Once a woman has a drink – really, one drink – she becomes completely incapacitated,” unable to consent and “turned into a child” in the eyes of the Title IX system. “There isn’t a mass movement” demanding this view of sex – it’s imposed from the top down.

Whelan said college women should have the freedom to be “reckless” and have drunk sex occasionally, and their word should be taken seriously when they say they weren’t victimized.

Instead, Title IX has been turned into a “therapeutic system” for college women, who are “actively encouraged to be worried about their encounters” with men, Whelan said. “I get called a rape apologist for criticizing” a widely cited study that found one in five women reported being sexually assaulted in college, but which was based on self-reported surveys of just two universities.

“We need to, dare I say, dial down the emotion on campus” on this issue, she said.

The new understanding of Title IX “didn’t spring out of nowhere,” countered Elizabeth Nolan Brown, associate editor at Reason: Colleges used to be “very bad” at investigating rape allegations, and as businesses they had an incentive to tamp down on such reports.

She said libertarians were bad at “coming from a point of empathy” in discussing alternatives to overbroad Title IX rules, using her own advocacy for sex workers against punitive sex-trafficking laws as an example. “You want the same things that [supporters of the current system] do,” Brown said: “You just have different ways to approach it.”

MORE: Sexual-assault study authors disavow how their work is portrayed

The problem now is that “groups that sort of make their living out of getting grants” have helped create a new bureaucracy around Title IX, and government pressure has led college administrators to crack down on anything with a sexual connection “out of an abundance of caution,” Brown said: “It’s just better safe than sorry.”

Administrators are also buying into the unscientific theory of “neurobiology of trauma,” in which a victim goes into a “coma-like mode” during the sexual assault and can’t immediately remember details but later reconstructs the incident perfectly, Brown said.

The law is widely misunderstood because of Obama administration guidance that created new regulations while pretending not to, including a 39-page guidance document from 2014 that was even more confusing than its 2011 forerunner, said Shibley, author of the book Twisting Title IX.

“Nowhere in Title IX does it say you have to have a full trial” in sexual-misconduct disputes, or even a guilty finding, he said. It also doesn’t say that “the second you start feeling an effect of alcohol” a sexual encounter becomes nonconsensual, a common administrative assumption, he said.

The use of questionable statistics to justify the current campus system – particularly the “more likely than not” evidence standard and strict limits on cross-examination – undermines “a thousand years of Anglo-American justice,” Shibley continued.

Regardless of what percentage of sexual-assault allegations are false – a hotly debated topic – it’s wrong to make “generalizations about groups of people,” he said. The excuse that “odds are good we got the right guy” may only be true “in the cosmic sense” but not in any individual case.

Citing the accused students he has met, Shibley said common consequences are suicide attempts and leaving college permanently, regardless of the adjudication result.

Much of today’s debates about sexual consent and colleges’ obligations are repeats of the early 1990s, said Cathy Young, contributing editor at Reason and frequent writer on feminism, from the audience.

“The elephant in the room here, really, is how young people are being asked to define” sexual assault, Young said – as experiences that “may be very hurtful” but are not nonconsensual. They are asked about having “unwanted sex” while intoxicated, and they are encouraged to “reassess” sexual encounters as rape, rather than process their mixed feelings in counseling.

The highest profile speakers are Bret Weinstein (below), the former Evergreen State College professor who refused to leave campus on the anti-white “Day of Absence,” and Northwestern University’s Laura Kipnis, who has faced multiple Title IX investigations for her writing on “sexual paranoia” on campus. Both are speaking at the New York event on the subject “Is the left eating itself?” 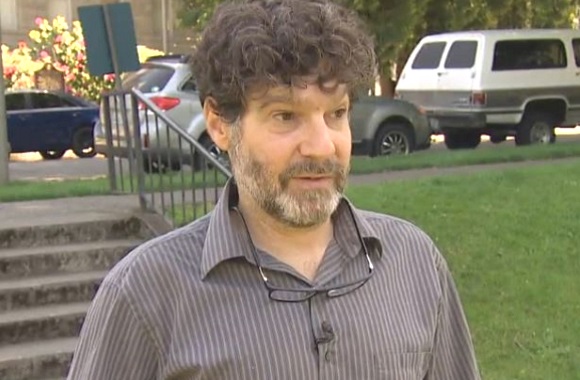