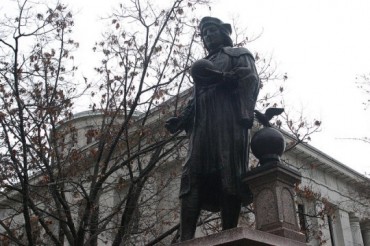 Students at the West Virginia-based Marshall University protested Christopher Columbus on Monday – Columbus Day – describing him as a mass murderer who launched the ultimate destruction of Native Americans and calling for the quasi-holiday to be abolished.

“Even in 2013, with so many facts out about the man, children are still being taught in school he was a good hearted man, even though he massacred a lot of the native peoples he came in contact with,” sophomore Autumn Lee told The Parthenon student newspaper at the public university.

“For the next 500 years, there was an emphasis on destroying Native American culture through conversion and education,” Lee, who organized the protest, told The Parthenon. “Even in the 1970s in Canada, there were still boarding schools where children were beaten if they spoke their language.”

Lee is a member of the Cayuga tribe of New York and Canada, according to the newspaper.

It’s unclear by the article if the protest was large; a picture of it shows one blonde female student holding a sign and not much else. The write up does not state how many students were involved in the effort.

But it’s not the first time Columbus has been disparaged by students or professors.

In 2007, Glenn Morris, associate professor of political science at the University of Colorado at Denver, called for the observance to be abolished. In an op-ed in The Denver Post, he stated:

Columbus Day … celebrates racist concepts of discovery, conquest and occupation. In fact, Columbus began the transatlantic slave trade with captured Indians from the Caribbean. Soon, Africans were forced into slave ships to replace the millions of indigenous Americans who were slaughtered in Columbus’ regime of invasion known as the Encomienda. For this crime against humanity alone, Columbus should be stripped of any accolades, honors or holidays.

Stephen Martin, a graduate assistant at Oklahoma University, told the student newspaper in 2012:

“It could and should be a day for contemplation and reflection. Of course, we cannot turn back the clock, and we cannot reverse centuries of colonialism. But we don’t have to celebrate it, as if it were some kind of great triumph, either.”

Writing for Daily Kos in 2011, SUNY women’s studies professor Denise Oliver-Velez stated in a post titled “The Three R’s of Columbus Day: Robbery, Removal and Rape” that “as an anthropologist, I can attest that more attention is placed in the classroom to ‘Indian pot-shards and burial mounds’ than to the harsh political reality of life on the rez or in the urban off-rez ghettos of places like Minneapolis-St. Paul.”

As a black American, I have a voice, a movement, congressional representation and even now a president who is cast in my skin color. Granted, that voice is often repressed, and I live daily with the affect of systemic racism on my community. We are 12.6 percent of the population as opposed to 0.9 percent for those counted as Native Americans and Native Alaskans reported in the 2010 census. And yes-there are those of us who are “black” who can speak of “red” roots as well. That same census shows 16.3 percent of the population as Latino or Hispanic, and we know that the history of rapine practiced by the Spaniards and Portuguese explorers did not extinguish indigenous DNA.