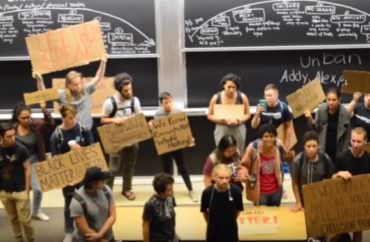 Students at Reed College are protesting a required humanities class for freshmen that focuses on texts from the great thinkers of ancient Greece and Rome, saying that “forcing students to take a mandatory Western Civilization course is really harmful.”

The self-named “Reedies Against Racism” student protest group began their efforts against “Humanities 110 – Introduction to Humanities: Greece and the Ancient Mediterranean” last September, claiming the class should be “reformed to represent the voices of people of color” in a list of 25 demands.

The protest continued this school year, as students interrupted the lecture, got in screaming matches with students, boycotted classes, and vowed to have silent protests during every lecture. The student activists have also brought in mental healthcare advocates for students who have reported having “panic attacks” due to the course material.

“The course in its current iteration draws from predominantly white authors and relies heavily on the notion that Western customs are the most civilized because they are derived from those of ancient Greeks and Romans who are considered the inventors of civilization,” Alex Boyd, a main Reedies Against Racism organizer, told The College Fix via Facebook recently.

“If Hum 110 were an elective course that would be fine, but forcing students to take a mandatory Western Civilization course is really harmful,” she added.

Kevin Myers, a Reed College spokesman, told The College Fix the course is much broader than that, noting it’s focused on texts from the ancient world that include Greece and Rome as well as Mesopotamia and Egypt.

“The goal of the class is to teach college level work like understanding primary sources from secondary sources, critically approaching texts through the various academic disciplines, and becoming an effective writer,” he said.

On the first day of Hum 110 in late August, Elizabeth Drumm, the Hum 110 program chair, cancelled the lecture right after it started due to Reedies Against Racism members interrupting the class to try to introduce themselves.

“I’m sorry, this is a classroom space and this is not appropriate,” Drumm stated, according to video of the disruption posted to YouTube by members of Reed’s student libertarian club.

After this lecture, three of the main Reedies Against Racism protest organizers, Addison Bates, Alex Boyd, and Tiffany Chang, were banned from attending the lecture during scheduled class time, according to a Facebook post by the activists.

Reedies Against Racism showed up to the second lecture early to engage in dialogue with the freshmen and it turned into a full-fledged screaming match between the two groups, the video shows.

Several freshmen voiced their concerns about not getting to learn in the class that they paid for, and Reedies Against Racism fought back, repeatedly slapping a table and basically saying the students were siding with the Hum 110 faculty to silence the protesters.

The lecture ended up occurring as planned and delivered uninterrupted despite the fracas before it started.

The third lecture would not even get off the ground. The lecturer for the day, Professor Kambiz GhaneaBassiri, cancelled class before it even started due to anticipated protests. According to a piece by Inside Higher Ed, GhaneaBassiri “declined to lecture alongside students who, he said, equated the course — and by extension him — with white supremacy.”

In October of last year, Hum 110 staff at Reed folded to the pressure and asked to have the decennial review of the course moved up a year.

The review, currently underway, is using “widespread data gathering, soliciting from the entire faculty thoughts and suggestions regarding concerns and recommendations that might be especially important in reviewing the course,” and the staff will review a “draft of the student evaluation of the course as a whole,” according to a piece by the Hum 110 staff in Reed Magazine.

According to Myers, the results of the review will be rendered later this fall.

Even with the success in getting the review moved up, the Reedies Against Racism have vowed to continue their protests until the curriculum is changed.

“Students are really hurt by Hum and by the faculty’s handling of the situation, and sitting in the well (on the floor in the front of the auditorium) has become a way for students who are passionate about racial justice to bond and show solidarity,” Boyd told The Fix.

With growing discontent with the current content of Hum 110, RAR recently distributed the work of Angela Davis, a member of the Black Panthers and communist party in the U.S., as supplemental reading to the freshmen in the class.

In a Facebook post, the student activists encouraged their peers to do comparative analysis between the texts and to “Make them explain why the Western Canon is more worthy of conference time than the Black Panthers.”

Several students have voiced concerns with these protests.

Sicheng Zhong, a freshman in the class, told Reason: “It is extremely disruptive and violates our right to learn.”

“They are using words like racist and white supremacist to describe our professors of color, one who is Iranian and another who is lesbian and Latina,” Zhong said.

When asked about these concerns, Boyd told The Fix: “I am a student of color who has trouble focusing because the curriculum at Reed is Eurocentric and is unrelated to my lived experience. Being told that the West is the most important topic of study damages my mental health and makes me less able to learn. I think this is true for many, many students of color, and that is part of why we do what we do.”

“… We haven’t received a lot of complaints about inability to focus, although we did receive a few about panic attacks, and so we have been working on having mental healthcare advocates present and making sure exit rows are cleared.”

The group held a boycott of classes on Monday to protest “anti-blackness.”

“As a supporter of this cause, I am choosing not to attend class on Monday [OR I don’t want to go to class on Monday]. I hope that you will understand the importance of this cause to the marginalized people of Reed and stand in solidarity by either cancelling class or offering rescheduled exams and other activities for those who attend the Boycott,” the email template posted to the Reedies Against Racism Facebook page stated for supporters of the boycott to use.

MORE: Class focused on great Greco-Roman books may be changed after students complain it’s too white