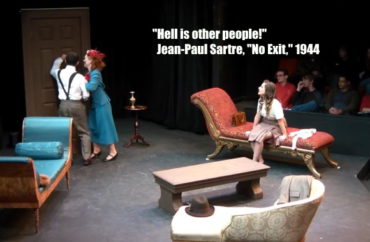 A petition has been launched against Western Washington University Department of Theatre’s decision to showcase the existentialist play “No Exit” this fall.

The petition argues the script is problematic because it gender stereotypes women and lesbians and puts a man in a quasi-leadership role, which perpetuates patriarchy.

“When choosing a play for the upcoming season, there seemed to be a blind spot: gender and sexuality were not considered,” the petition states. “We understand that this is a piece that is meant to challenge us as a department, but this play is not challenging if it doesn’t allow us to feel safe.”

The petition also argues the play is inappropriate at this time because it is set in one room in which the characters cannot escape, thus may be too “mentally taxing for the community to watch. Especially if we are still in quarantine at that time.”

“This play is not challenging, but instead is reinforcing classical notions of womanhood designed by the patriarchy,” the petition states, adding “it is disturbing and unacceptable.”

“No Exit” is a play by French philosopher and existentialist Jean-Paul Sartre. Penned in 1944, it’s about three people trapped in a room, and as they spend more time in it they come to realize that being trapped in eternity with the same three people is hell as opposed to fire and brimstone.

The play’s most famous line — “Hell is other people” — comes toward the end when the male character realizes this:

“What? Only two of you? I thought there were more; many more. [Laughs.] So this is hell. I’d never have believed it. You remember all we were told about the torture-chambers, the fire and brimstone, the ‘burning marl.’ Old wives’ tales! There’s no need for red-hot pokers. Hell is — other people!”

What concerns the activists at Western Washington University is the plot that surrounds the three main characters. One woman, Estelle, pines for the man’s affection, named Garcin. The other woman, a lesbian named Inez, seeks comfort from Estelle, but is rebuffed.

“The stereotype surrounding Inez is inaccurate and extremely harmful and perpetuates abusive ideals around lesbian-identifying individuals,” the petition states. “This [is] the wrong kind of queer representation that is very hurtful to LGBTQ+ people in the student theatre community.”

The play includes unwanted sexual advances, another concern listed in the petition.

“Plays with depictions of sexual harassment or unwelcome sexual advances are harmful and may reignite feelings of trauma within audience member and students that are watching/working on this piece,” it states.

A dozen students worked together to author a six-page petition explaining why the department should ditch the play. The effort is headed up by WWU theatre student Katie Ginther.

“Gender stereotyping and sexuality stereotyping is just not needed,” Ginther told The College Fix in an interview. She said the play is based upon the idea that women “need men,” but, “we don’t,” Ginther said with a chuckle.

Asked about the timing of staging a play set in what amounts to eternal quarantine during an actual pandemic, Ginther said that “no matter what time we are in, we don’t need a play like this anymore.”

Ginther is no stranger to petitions. She was involved in a lengthy list of demands pertaining to combating systemic racism within the Western Washington University theatre department in 2020, which she shared with The Fix.

Asked if the “No Exit” petition is reflective of the entire WWU theatre department, Ginther replied in saying “Yeah, it definitely is.” Not only that, there is “no backlash” from anyone in the department about the prospect of re-evaluating or replacing the play, she said.

Ginther said she was encouraged by the theater department chair to launch the petition and “see what the response of the students and audience members were.”

It has garnered nearly 200 signatures so far and it is unclear if the show will go on, there has been a delay in the verdict due to spring break, Ginther said.

Currently, there have been no castings or auditions held for the play but it remains on the listing as part of the 2021-22 WWU theatrical season. The website notes the line up was created from “student suggestions and faculty discussion.”

If the play is produced after all, Ginther said she personally “will support students that choose to be in the play.”

The petition does suggest many alternative plays to “No Exit,” but notes that if it is put on it should include a trigger warning for the audience and sensitivity training for those involved in the production.

It also calls for “a female and LGBTQ+ led panel before or after the play that is REQUIRED for all audience members to attend.” [Emphasis in the original].

MORE: Theater department cancels play because some whites might be cast as Asians