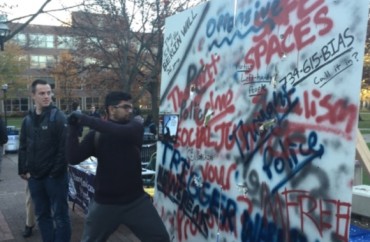 A large mock-up of the Berlin Wall meant to remind students at the University of Michigan of the importance free speech was instead roundly criticized by many students, with some even declaring that the display constituted a “bias incident.”

The mock-up was erected Monday, on the 26th anniversary of the real wall’s demise, in the center of campus. It included spray painted graffiti comments representing censorship, including “report me,” “safe spaces,” and “trigger warning.” At one point demonstrators even mimed the historic moment during which East Germans took mallets and hammers and tore down the wall.

The display’s objective was to both commentate the historic event as well as link USSR-era repression of ideas and speech with modern politically correct speech and thought police movements on campus, organizers told The College Fix.

Yet many students declared the fake Berlin Wall offensive and an example of privilege – and at least one student told organizers – Young Americans for Freedom – that the display should be reported as a “bias incident.”

Another student even pulled out his phone and reportedly called administrators to lodge an official bias complaint.

The public university administers a “bias incident” reporting system, which includes a phone number “hotline” and an online form, with which students may report things on campus that upset them.

“If you witness or experience conduct that discriminates, stereotypes, excludes, harasses or harms anyone in our community based on their identity (such as race, color, ethnicity, national origin, sex, gender identity or expression, sexual orientation, disability, age or religion) please report it to the university,” the website reads.

One student told the Michigan Daily that the Berlin Wall display “ignores all the progress we’ve made on promoting political correctness, and social justice across the university. It just puts it on some wall for some people who are privileged to take turns beating at. It’s unbelievable. This is a bias incident, and it needs to stop.”

Other students told the Daily they did not understand the link between Soviet-style repression and campus speech codes, and felt the event went overboard.

Members of Young Americans for Freedom faced other criticism as well. On the Facebook page for the event, it was called “an embarrassment to the University of Michigan and to our student body.”

And while passing out free constitutions as part of the demonstration, YAF members were told by a female student passing by: “You are the type of guys who will rape your wives.” She flipped them off with her middle finger as she strode away.

Chairman of YAF’s University of Michigan chapter, Grant Strobl, said the reaction to the display is unfortunate.

“After being told that we should die, that we are rapists, that we are idiots, and were stereotyped based upon ethnicity, I have realized that the people who criticize efforts to fight for free speech and against political correctness are hypocrites,” he stated on the New Guard Blog.