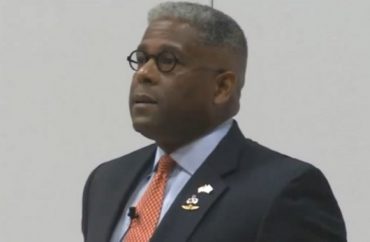 More than 100 students walked out on retired U.S. Army Lt. Colonel Allen West on Thursday as he began a speech at Saint Louis University to discuss the threat of radical Islam.

The students protesters — led by the SLU Rainbow Alliance and the Muslim Students’ Association — had arrived early and filled many of the seats in the two-story auditorium where West was slated to speak. As he took the stage they stood up and filed out.

At issue is West’s use of the term “radical Islam” — also the subject of his speech.

Last week an administrator at Saint Louis University told the conservative and Republican students organizing the talk that they were not allowed to use the words “radical Islam” on advertisements for the event, reported Young America’s Foundation, which sponsored the talk.

In response, West wrote an article saying he had been “censored,” called modern college students who seek safe spaces “little cupcakes,” and added:

I along with the YAF activists will not back down from this challenge. And if this is just a case of ill-conceived political correctness, we’ll rectify that. But, if this is a case of the influence of stealth jihad radical Islamic campus organizations such as the Muslim Student Association, an affiliate of the Muslim Brotherhood, then you will be exposed. And I recommend to the President of St. Louis University, you do not want it known that a radical Islamic organization is dictating speakers on your campus — that is not the type of PR you really want.

The fiery comments and the subject of his speech prompted the walk out.

“Our administrator made a request for him to tailor his speech to our community, and in response he made a lot of hateful comments about our students,” student Claire Cunningham told The Riverfront Times.

Saint Louis University president Fred Pestello told students in an email he stood in “solidarity” with them, calling West a “provocateur.”

The students — reportedly inspired by West calling them “little cupcakes” — also sold cupcakes outside the venue with proceeds to benefit Syrian refugees. As the students left the auditorium, West donated to the cause.

Had the students stayed, they would have heard a speech on how radical Islamic terrorism has reached American shores, and how the U.S. government is obfuscating the issue, and in some cases apparently covering it up, calling terrorist attacks on U.S. soil workplace violence or other names.

West cited more than a dozen terrorist attacks in America in recent years inspired by radical Islam as he continued his speech.

West said these issues should not be muddled in party politics, considering that “during 9/11, no one came in looking for Republicans or Democrats. They came looking to kill Americans.”

As a 22-year veteran who participated in both Operation Desert Storm and Operation Iraqi Freedom, West also noted his extensive experiences dealing with radical Islamic terrorism, saying that “the greatest enjoyment I had was working with the Afghan army to make sure little Afghani girls could go to school.”

As for the walk out, YAF national spokeswoman Emily Jashinsky said the response received at SLU is not uncommon.

“This is what happens when students attempt to bring one conservative speaker to a liberal campus,” she said. “Threatened leftists do everything they can to erect obstacles.”