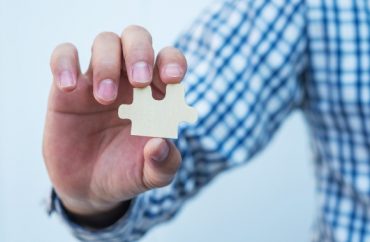 Students at Elizabethtown College this month are wearing white pins in the shape of puzzle pieces to remind them of their white privilege.

The campaign was launched over the weekend by the Elizabethtown College Democrats, who say it aims to make students at the small and private liberal arts college in Pennsylvania more introspective about issues of race, especially in their predominantly white region of Lancaster County.

“Discussions about race are often perceived as being only open to people of color, but I think it is just as important for white people to partake in conversations about race,” Aileen Ida, president of the College Democrats, told The College Fix via email.

Ida said white people are continually allowing for a societal system of oppression to occur unless they work against it. The white puzzle piece pin represents racial struggles of all sorts.

“No matter how accepting someone is, that doesn’t stop them from being part of a system based on centuries of inequality,” she said, adding the campaign transcends politics.

Take a quick glimpse of what our campaign will involve! pic.twitter.com/bH2EC1lILl

Asked if all white students are privileged, Ida responded “yes,” but clarified that she doesn’t think all whites are socioeconomically privileged. Ida declined to cite specific examples of white privilege.

She also clarified that it’s not just white students who can wear the pins, that students of all races should take part to start a campuswide discussion that crosses racial divides.

Yet, she notes most people of color already have to live with racism while white people don’t.

According to the campaign’s official Facebook page, the project is similar to one started by a Lutheran pastor who made a commitment to “wear a white puzzle piece pin every day for a year to force herself to think about her white privilege and the impact white privilege has on people of color.”

The Elizabethtown College Democrats’ effort also “forces everybody to think about racial issues people face daily,” its Facebook page states. The campaign is slated to last through the month and beyond.