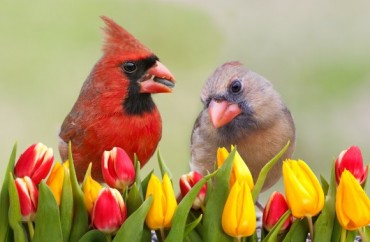 Ever look out your window in the spring and see that bright red cardinal sitting on a branch? And nearby is his mate, whose color happens to be significantly less elaborate?

Well, some scientists have an idea as to why that is: “they [females] could be seeking to avoid sexual harassment.”

“We suggest that female ornaments could lead to increased sexual harassment by males and this could be especially costly to the number of offspring you leave behind. The energetic cost of harassment — by either avoiding males or dealing with unnecessary sexual attention — would reduce your egg production,” says Professor David Hosken of England’s University of Exeter.

Looking drab is not the only tool in the female animals’ anti-harassment armory. They are known to go to great lengths to avoid unwanted male attention, even — in some cases — disguising themselves as males.

The research into this latest theory of the avoidance of unwanted male attention has been published in the journal Animal Behaviour and also involves work by a scientist from the University of California, Santa Cruz.

“We are not suggesting that male harassment of attractive females is the only explanation for lack of sexual ornamentation … but want to alert researchers to the idea that this could be a contributing factor,” said Professor Hosken.

As the Washington Examiner’s Ashe Schow says, “I’ll take Hosken at his word, but this does seem like just another excuse to use ‘sexual harassment’ as a way of explaining human behavior.”

RELATED: An inside look at the University of Arizona’s sexual-assault climate survey

RELATED: Frats under fire for study linking them to unheard-of sexual assault rates