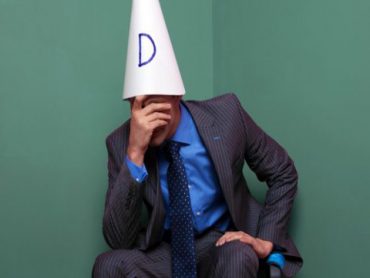 Across the pond at the Samworth Church Academy, Principal Barry Found believes he’s some kind of pedagogical genius: He’s laid down an edict that bans students from … raising their hands to answer questions.

“We find that the same hands are going up and as such the teaching does not challenge and support the learning of all,” Found says.

“From Monday, November 28, hands will only be raised in the academy to establish silence for listening (the students are very used to this practice and are brilliant at it.) We will use a variety of other techniques to ensure that every student is challenged and developed in class through our questioning and that every student has opportunities to contribute and participate.”

Naturally, teachers aren’t too fond of this mandate.

Former head of the Trinity School Michael McKeever said “It is totally unnecessary because a good teacher wouldn’t go back to the same person, you make sure everyone in the classroom is engaged.

“This is an issue of teacher professionalism, not a rule change. It’s a bit gimmicky in my opinion. Putting your hand up is showing enthusiasm, if you’re suppressing that then it’s not good.

“If the reason is that the same children are always putting their hand up then the issue is the teacher and their methods.”

And here’s the spot-on Kat Timpf from NRO:

Hand-raising also allows students to decide which questions they feel the most comfortable answering. Everyone has good and bad subjects; everyone has good and bad days, and allowing hand-raising gives students the chance to answer the questions that they feel the most confident answering. Denying students who are excited about a particular subject the opportunity to proudly display their knowledge of it takes the fun out of learning, and knowing that you might randomly be called on when you weren’t paying attention because your dog died last night certainly does the same thing. Of course, there are always those students who just never raise their hands to answer questions, and those students certainly would be fair game for something like a random call-out. But again, that’s something that can be handled on a case-by-case basis, and handling things on a case-by-case basis is exactly what this policy forbids.

I made this exact case in the early 2000s when my school district was subjected to the risible “Courageous Conversations,” the brainchild of a guy named Glenn Singleton.

Singleton’s premise, in a nutshell, is that minority students suffer from a “white-centric” educational system, that white teachers cannot relate to these students and, hence, they suffer academically. (EAGNews.org has covered Singleton’s machinations extensively.) One day, our staff received an email from the principal stating that teachers were to use — exclusively — popsicle sticks (with students’ names on them) to call on students to answer questions.

The rationale? It would prevent any teacher “unconscious bias” — that is, racial bias as, supposedly, teachers don’t call on minority students as much as white.

Our principal noted his decision was based on a student questionnaire given at the end of the previous school year in which some minority students had claimed they weren’t called on as much as their white peers in class.

I responded to the email (with “reply all” as I had thought, mistakenly, that the principal’s note was a conversation starter) with precisely what McKeever and Timpf had noted above.

It did not go over well.

I (and everyone — remember the “reply all”) was told that all teachers had to comply, and failure to do so could be noted on official (teacher) observations. In addition, I personally received a follow-up message from two central office administrators stating they wanted to meet with me to discuss the issue.

Was I supposed to be intimidated by this? Admittedly, I was somewhat, but I knew I was right. Such a one-size-fits-all approach was ludicrous, and I was prepared to defend my position, even to the state secretary of education if necesssary. As such, I responded to the administrators noting when I was free for the next week.

I never heard back from them. And they never showed up during any of my noted planning periods. Imagine that.

My personal view of the whole matter is that our principal was just following orders from above, and that his heart wasn’t really in it, so to speak. I think he knew our staff, including minorities, was quite skeptical of Singleton’s entire program, and this was just the latest example.

As it was, I never followed the popsicle stick edict. I was prepared to suffer any negative observation comments with a rebuttal note (as we were allowed to include) had it come to that. It never did.

A couple of years later we got a new central office administration, and Singleton’s “Courageous Conversations” were rather unceremoniously — and mercifully — phased out.

MORE: Oklahoma high school teacher’s classroom lesson: ‘To be white is to be racist’