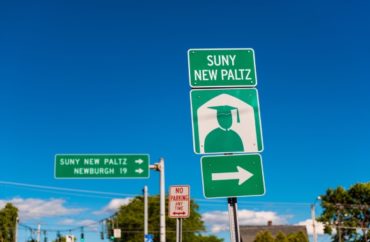 The SUNY New Paltz College Council recently voted 4 to 3 to rename six buildings on campus named after New Paltz founders who fled Europe from the French Monarchs’ religious persecution to the New World, subsequently establishing the town in exodus during the 17th century.

The decision caused at least one of the council members who voted against renaming the buildings to resign, stating “the doctrines of racial victimhood and bloodguilt that we are being asked to endorse implicitly today strike at the very heart of [the] American idea.”

But those in favor of the name changes say the buildings honor the six families who were the first European settlers in New Paltz in 1678, and that research has found the “earliest generations of these families” owned slaves.

SUNY New Paltz President Donald Christian is a staunch supporter of the name change effort, which still must be approved by the SUNY Board of Trustees, a decision expected to made this spring or summer.

A President’s Report on the issue remarked that “the nation and its organizations have a long history of decisions that consider primarily (or solely) the perspectives of white America, or that favor or benefit white people.”

On a more personal note, it added that “wrestling with this issue for President Christian has been a case study of white privilege, which the President knows he has benefited from in his life.” Others support the initiative because of its general commitment to “remediating past and current inequities.”

The buildings at the Southeastern New York campus targeted for renaming make up the Hasbrouck Complex, which consists of five dorms and a dining hall. They are called Bevier Hall, Crispell Hall, Deyo Hall, DuBois Hall, Hasbrouck Dining Hall and Lefevre Hall. As a collective, the complex pays homage to New Paltz’ co-founders and their familial legacies, with each building bearing the last of name of examples of early settlers.

For instance, the DuBois Residence Hall is named after Louis Dubois, one settler who helped establish New Paltz along with Jean Hasbrouck circa 1678. Much later, one of Hasbrouck’s decedents, Josiah, served in the early chambers of Congress during the Jefferson and Madison administrations.

In spite of establishing New Paltz, the settlers’ association to slavery is what President Christian and other supporters say morally justifies the removing of these colonial dedications.

In August 2017, the building renaming process began when President Christian tasked the the college’s Diversity and Inclusion Council to ponder replacement names. The council surveyed students, staff, faculty and alumni and gauged their support for more than 20 options for alternative nomenclature.

On campus, finding favor for the name changes is no arduous endeavor. There’s been two resolutions supporting the removal and replacement of the Hasbrouck names: one approved in spring 2018 by the Student Senate and other in the fall by the Faculty Senate in a 51 to 0 vote with two abstentions.

Vanessa Plumly, associate professor of German studies at SUNY New Paltz, approves of the re-naming resolution, stating in a video made by the college that when buildings “are named after colonial officers or people who have established colonies—it’s obviously exclusive to white folk… People cannot feel like they belong if names represent oppression.”

And Melissa Yang Rock of the Geography Department touted her support as well. The professor said in the video she is certain that there are broader implications of certain building names: “It’s not just a name. It’s also symbolically important. Who is on that [building] what history are they representing?”

Interim Chairperson of the council, Eli Basch, followed suit in his support and added that “students feel genuinely disrespected by having the current names in place.”

Members on the College Council that voted against the re-naming initiative were just as vocal on their positions as well.

Michael Catalinotto is one example.

To deface them, Catalinotto said, would be an erasure of history, according to the meeting’s minutes.

Prior to the vote, Catalinotto injected two letters into the record from Huguenot descendants who wrote the council in opposition of the measure.

In a statement, the former senator began by touching on the American idea that “in a land of liberty, each person, regardless of who his ancestors were, has the power to make something of himself.”

DiCarlo asserted his opposition by stating that “the doctrines of racial victimhood and bloodguilt that we are being asked to endorse implicitly today strike at the very heart of that American idea. I hate those doctrines because I love America, and all its people, regardless of their origins or ancestry.”

After the council’s approval of re-naming the buildings at the February meeting, but before adjournment, DiCarlo resigned from the College Council and inserted a resignation statement into the record which warned of the precedent the decision sets.

In it, DiCarlo said that “I truly believe that the action taken today regarding stripping the names off buildings will lead to even more actions by this College that I wish not to be associated with, such as banning books which some might be offended by, and the continued silencing of speech and thought regarded as offensive by those political classes that now rule on college campuses.”

But President Christian has said some sort of remembrance of the founding families will be established on campus.

“I have heard the characterization that by recommending these names be replaced we are ‘erasing history.’ I disagree with that view,” Christian stated. “Quite the contrary we want to be certain that we portray relevant history more fully. That includes the history of Huguenot patentees and their descendants and their positive contributions, along with the history of slavery. It also includes the history and contributions of enslaved Africans and their descendants and the indigenous peoples who were here before the Europeans and Africans. These people have been treated through our history as the ‘other’ — their stories have often been ignored or minimized, another specific legacy of history.”