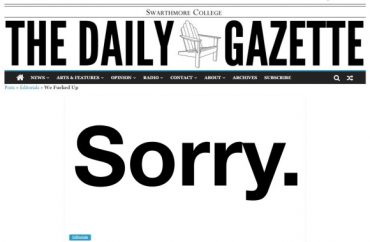 The Daily Gazette is not a ‘platform for self-satisfied and insidious classism,’ editors say

The gist of the op-ed about Swarthmore — a top-ranked private liberal arts college in Pennsylvania that costs nearly $50,000 a year in tuition and fees to attend — is that its need-blind admissions program basically means students from rich families help subsidize tuition for students from poorer families.

The column, penned by student Erin Jenson and headlined “The Admissions Office Doesn’t Care About Your Values,” disputes the college’s claim that its admissions decisions are made without considering students’ financial needs, writing she believes that cannot be entirely true as applicants must fill out an extensive family background check that indicates to admissions officers an applicants’ apparent wealth.

Jenson went on to use blunt language about the set up, writing that “demonizing wealthy students is not productive because, in the end, they are paying not just for their own education but also for the education of their hyper-liberal classmates who resent the upper class at its core.”

“Is this fair? No. But life isn’t fair. That’s reality. Stop whining and get over it,” she added. “‘Check your privilege’ should be replaced with a warm ‘thank you so, so much for being forced to pay for my opportunity.'”

Less than a day after it was published, The Daily Gazette editors apologized for the op-ed in an editorial headlined “We Fucked Up.”

“The out-of-nowhere passage where the author writes that wealthy students ‘are paying not just for their own education but also for the education of their hyper-liberal classmates who resent the upper class at its core’ has no factual basis. The subsequent injunction to ‘stop whining and get over it’ is just plain offensive. Finally, there’s the deplorable suggestion that aided students warmly say ‘thank you so, so much for being forced to pay for my opportunity’ instead of ‘check your privilege.’ The Daily Gazette is a place for diverse opinions, but it is not a platform for self-satisfied and insidious classism,” editors wrote.

In an interview, Jenson told The College Fix she stands behind her op-ed.

“I wanted to point out that admission favors privilege yet encourage hatred of the rich,” she said.

In her column, she argued:

An example of one of these indicators is the family background check. Swarthmore’s application asks for students’ parents’ professions and the high school they attended. If a student’s parents are both lawyers and the student attended an expensive prep school, this student likely has an advantage over a student who attended an average public school. So, why do they probably have this advantage? The admissions office has a real incentive to accept people with a wealthier background for two reasons: (1) They know wealthy students can afford full tuition. (2) They know rich parents are potential donors. Both mean more money for Swarthmore.

Jenson appears to be mostly hypothesizing. She has no direct proof. She does, however, support her position by citing several other well-known institutions that have been shown to do the very same thing.

But some Swarthmore students must have been triggered by Jenson’s piece because the Gazette’s editors called its publication a “failure” of the editorial process. In an email to The College Fix, the editors defended their stance.

“Our apology has nothing to do with political censorship,” they stated. “The Daily Gazette regularly publishes conservative viewpoints; in fact, our opinions editor is the head of the Swarthmore Conservative Society. But the articles we publish, whatever their ideology, have to be reasonably argued and civil, which was actually true for large parts of Erin Jenson’s piece.”

“The primary issue with the article was that certain parts made inflammatory and abrasive statements about students on financial aid that were both uncivil and improperly fact-checked by our editors,” they added. “After publication, we realized that these parts should have been taken out, so we apologized to our readers who had very justifiably been disappointed that we would publish those words under our banner. Also note that the article in question is still available on our website.”

But a former Gazette editor says the editorial board should not have apologized.

Arjun Vishwanath, who was once the Gazette’s opinion editor, said in a letter to the editor that the Gazette “is not trying to publish pieces on the level of The New York Times or The Atlantic, but rather it is trying to give a platform for students and groups to speak their minds.”

Vishwanath, who says he disagrees with Jenson’s premise, added the editors “fucked up precisely in backtracking on the article, in what appears to be a decision driven in part by negative public opinion towards the piece and the DG.”

“I have seen a number of thoughtful critiques of her argument,” Vishwanath wrote. “In this way, the publication of the piece has done a service to the community, as I believe it is better for these issues to be discussed in the open rather than fester in private.”