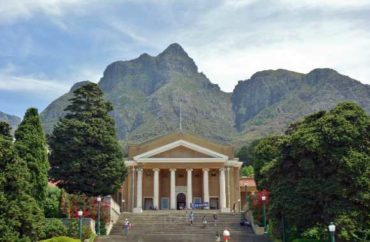 Philosopher David Benatar at the University of Cape Town in South Africa has written a chilling dispatch for Quillette describing his own campus as a hotbed of racial bitterness, intimidation and violence.

His description of his university’s situation reads like a dystopian magnification of the unrest on American campuses, where “antiracist” progressives invoke our nation’s histories of racism as justification for razing liberal institutions to the ground.

Benatar’s university has been repeatedly shut down since the 2015 onset of the #FeesMustFall student-led protest movement aimed at ending student tuition hikes and increasing government funding for universities.

At the University of Cape Town, Benatar wrote, a small group of activist students calling for “decolonized” higher education and lower fees has destroyed university property, physically attacked staff and fellow students, and conducted a campaign of intimidation against a dean that led to his suicide. According to Benatar, no one at the University of Cape Town has been disciplined by the university or found guilty of a crime.

South Africa’s ugly history of racial tension and racism no doubt has contributed to the rancor on campus. Apartheid in the second half of the 20th century legalized segregation between South Africa’s white minority and nonwhite majority and discrimination against the latter, according to Britannica.

Legislated apartheid ended in 1994, but its cultural and social effects persist. Today, Benatar wrote, the country has a generally liberal constitution, but the dominant party, African National Congress, still holds the West in contempt for its colonialist history and sympathizes with authoritarian regimes and “Third-Worldist rhetoric.”

In the aftermath of this history, Benatar describes how the ideological divide represented on American colleges campuses – between conservatives who fear academia’s slide into censorious and divisive radicalism, and progressives who claim that universities are still ruled by structures of oppression and that conservatives’ moral panic is making it worse – are heightened to an even greater degree at the University of Cape Town, “Africa’s leading university.”

In his book describing protests and aftermath, “The Fall of the University of Cape Town: Africa’s Leading University in Decline,” Benatar describes the events at the university following #FeesMustFall protests beginning in October 2015:

On multiple occasions in 2015, 2016, and 2017, the university was shut down for weeks at a time by a relatively small group of activist students demanding “decolonized” higher education and an end to increases in student fees. In ostensible pursuit of these goals, protesters set fire to historic artworks, university vehicles, and the vice-chancellor’s office, and vandalized university buildings with human excrement.

More worrying still, they intimidated hundreds of people with threats of violence backed by instances of assault. An activist used a sjambok [a heavy leather whip] to whip a cellphone out of a fellow student’s hand, a vice-chancellor was punched, students and staff who defied the protesters were pushed and shoved, a security guard was beaten with a steel rod, and another had to be hospitalized after a rock was dropped onto his head. No one was ultimately held accountable, either by the university’s disciplinary system or in the country’s courts. …

Furthermore, the behavior of activists indicates that racial abuse is now compatible with the pursuit of social justice, so long as the recipients of such abuse are either pale-skinned and/or insufficiently progressive in their politics. One student protester wore a t-shirt bearing the phrase “Kill All Whites”; a memorial to soldiers killed in both World Wars was daubed with the words “Fuck White People”; a senior academic who referred to a junior colleague as “just another fucking white woman” was appointed to a senior administrative position shortly thereafter. Darker-skinned students and faculty, meanwhile, who do not toe the party line, have been denounced as a “coconuts,” “sell-outs,” “colonial administrators,” and “porch negroes.”

On July 27th, 2018, Professor Bongani Mayosi, Dean of the UCT Faculty of Health Sciences, committed suicide after he was persecuted by activists disrupting the campus. Professor Mayosi’s sister did not hesitate to hold the #FeesMustFall protesters morally responsible for this tragedy. “He was hardly two weeks in his new position and the protests broke out,” she told the Sunday Times. “The vitriolic nature of the students and their do or die attitude vandalised his soul and unravelled him. Their personal insults and abuse cut him to the core, were offensive to his values and were the opposite of everything he was about.”

This kind of bullying has become pervasive, and some of it comes from the top down. In 2020, Zetu Makamandela-Mguqulwa, the university ombud, reported that she had received 37 complaints of bullying by the Vice-Chancellor, Mamokgethi Phakeng. When the university’s governing council tried to suppress her report, she published it on the ombud website and criticized the council for failing to address the VC’s conduct. She was then summoned to meet the chair of the council to answer unspecified charges of “misconduct.”

Other instances of bullying, however, come from the bottom up—when vexatious charges of racism are made against faculty by unscrupulous students bent on getting their own way. Still other instances of bullying are peer to peer. But bullying in any direction is invariably justified with reference to the persecutor’s membership of a historically “oppressed” group, even when their victim is also a member. That is why a black female vice-chancellor can accuse a black female ombud of participating in racist machinations against her.

The endless charges of racism are “almost always groundless,” Benatar wrote; nonetheless, they are treated with great seriousness by students, administrators and faculty and have significantly curtailed free expression. Racially divisive pedagogy has infiltrated the classroom; Benatar describes one case in which a lecturer assigned the exam question: “Write detailed notes on race and racism. In your answer take care to specify the reasons for the impossibility of friendship between blacks and whites.”

Post-apartheid South Africa, is still “obsessed with race.” Institutions are committed to “decolonizing” and “transform[ing]” university curricula, Benatar stated, including in the fields of medicine and science. Racial quota policies and practices the University of Cape Town regularly administers would be illegal in the United States and Canada. Even more, the people who have benefited from such quotas and other racial preference policies are a large majority at the University of Cape Town.

Benatar ends his essay with an acknowledgement that the events at the University of Cape Town may only seem more extreme to him because he is seeing them up close; nonetheless, he is “convinced that concerns about a conservative and liberal moral panic at UCT are misplaced.”

“Such accusations are used to dodge moral responsibility and to justify cruelty, violence, and vandalism in the name of self-righteous indignation.”

Those concerned with disconcertingly similar illiberalism on American campuses, and the greater disorder that the South African example suggests that we must fear, would do well to consider Benatar’s book a cautionary tale.