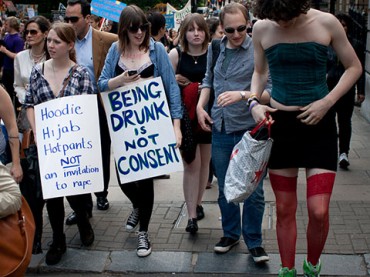 The Association of American Universities released the results of its 27-school “climate survey” on campus sexual assault on Monday, and officials explained on a conference call with reporters why this one is the gold standard.

Unlike earlier surveys, the AAU survey included both a large number of campuses and a large sample size at each participating school, said Bonnie Fisher, a consultant for survey design firm Westat and professor at the University of Cincinnati.

Prior surveys were “plagued” by differences in definitions and methods, how they were administered and how they were designed, Fisher said. The AAU survey precisely measured how many students said they were sexually violated by clearly defined methods of contact (penetration and touching) and “tactics” (physical force, drugs and alcohol, coercion, absence of affirmative consent).

You would think with this careful design spread across more than two dozen large research universities, the AAU survey results would differ notably from previous surveys that suffered from vague definitions, small samples and “selection bias,” meaning an overrepresentation of people with strong views on the subject in the survey pool – all of which contributed to implausibly high levels of reported assault.

Nope. This survey found slightly more sexual violence than the well-known but questionable statistic that 1 in 5 women are sexually assaulted in college:

The incidence of sexual assault and sexual misconduct due to physical force, threats of physical force, or incapacitation among female undergraduate student respondents was 23.1 percent, including 10.8 percent who experienced penetration.

This result made no sense to me, so I flipped to the section of the report that defines “incapacitation” (page viii of the executive summary), a concept that is so poorly explained on the average campus that it’s practically meaningless:

“….unable to consent or stop what was happening because you were passed out, asleep or incapacitated due to drugs or alcohol”

You’ll notice that is not a definition of incapacitation – it’s a tautology (incapacitation means being incapacitated) – and it’s not meaningfully different from how other surveys have treated incapacitation, as something you just know when it’s happening (to yourself or your partner).

Indeed, students are now repeatedly warned at many campuses that they or their partners can’t consent if they are “incapacitated,” “intoxicated” or just “drunk” (we’re looking at you, Coastal Carolina), and judging whether an accuser was in a state of mind to be able to consent to sex (and whether the accused should have known) is one of the central tasks of campus adjudications.

RELATED: If you don’t have the best sex of your life at Coastal Carolina University, it’s rape

Since everyone agrees that alcohol (at the least) is involved in a significant number of campus sexual experiences, if not most of them, you’d think that telling students the precise conditions for incapacitation would be indispensable for getting accurate answers.

When I asked officials on the call why the definition was so loose, and how it could lead students to think they were incapacitated when they were drunk but still cognizant of their actions, they basically shrugged.

“That’s a fairly standard phrase that’s used on a number of other surveys” and it was taken from the White House’s task force on sexual violence, Westat Vice President David Cantor said. “We actually modified that statement a bit to make it more strict,” and “it’s not just talking about being drunk.”

No one seemed to appreciate the irony that the AAU and Westat were bragging about designing a survey that avoided the pitfalls of all its predecessors, and yet it made the same giant honking mistake as every survey before it: treating incapacitation as something self-evident.

There’s every reason to suspect that students who were already uneasy about prior sexual encounters – perhaps because they were drinking at the time – would identify in retrospect as “incapacitated,” if prompted, unless they were told in detail that it’s more than just acting stupid when you’re drunk.

Brett Sokolow of the National Center for Higher Education Risk Management, which advises schools how to design sexual-misconduct policies and proceedings, gave a thorough definition of incapacitation 10 years ago that could have been useful to AAU and Westat:

One becomes under the influence of alcohol as soon as one has anything to drink. Impairment begins as soon as alcohol enters the bloodstream, and increases with consumption. Intoxication and inebriation are synonyms, as is drunkenness, and corresponds to a .08 blood alcohol concentration. Incapacitation is a state beyond drunkenness or intoxication. What is confusing about incapacity is that it has nothing to do with an amount of alcohol or a specific blood alcohol concentration. In fact, some drunk people will be incapacitated, and some will not. Incapacity can be defined with respect to how the alcohol consumed impacts on someone’s decision-making capacity, awareness of consequences, and ability to make fully-informed judgments.

Though his discussion goes on to give colleges far too much leeway to judge that what appeared consensual, to both parties, at the time of sex, was actually not consensual in retrospect, at least those conditions put some intelligible limits on the concept of incapacitation.

I’ll have more thoughts on this report, and a review of other skeptical reactions, in a future post.