Sometimes, when people take stances that are “outside the box,” they are bold truth tellers. But often times, the “box” is what keeps people safe and alive. The Wright Brothers saw something nobody else saw and improved our way of life; the previous adventurers who thought they could jump off a cliff and take flight by flapping their arms? Not so much.

Right now, the “box” is telling people to literally stay in the box; 97 percent of Americans are currently under some sort of stay-at-home order to prevent the spread of COVID-19. The math is simple; since the virus travels from person to person, keeping people separate will slow the spread and make infections manageable until a vaccine is developed.

Some researchers, however, are stepping outside the box, arguing that mass quarantines do more harm than good – and an anxious public that has seen their employment, income, and freedom diminished are willing to hear them out.

Such is the case with Knut Wittkowski, the former head of the Department of Biostatistics, Epidemiology, and Research Design at the Rockefeller University in New York City, who says the coronavirus could be “exterminated” if society went on as usual, provided we sheltered our most vulnerable citizens until we were out of danger.

“[W]hat people are trying to do is flatten the curve. I don’t really know why,” Wittkowski told the Press and the Public Project.

“But, what happens is if you flatten the curve, you also prolong, to widen it, and it takes more time. And I don’t see a good reason for a respiratory disease to stay in the population longer than necessary,” he said.

Here’s a good reason: By “flattening” the curve, you could save millions of lives on the front end while researchers get a handle on the disease. Under most models that predict what would happen if we went about our daily lives, there would be a huge spike in infections and deaths at the beginning of the curve, and it would eventually level off. Wittkowski is correct in pointing out that “flattening” the curve would stretch the timeline of infections out a little further, but in the end, we would have far fewer infections and deaths.

If nature were to take its course and the disease were to spike, it would render hospitals, doctors, and emergency technicians completely unable to handle the crisis. Many more people would die than necessary.

The recent madness in New York City would be seen everywhere across America. By flattening the curve, you may stretch the infection timeline out a bit further, but those patients on the back end will be able to get better care, as health workers will have a better grip on how to handle patients. Who knows – by then, maybe Trump’s dream of hydroxychloroquine being a miracle treatment will have come true.

Wittkowski’s answer is to bolster what is called “herd immunity” – the idea that the public has to be exposed to the disease before they can develop a resistance to it.

But “herd immunity” is typically achieved by vaccinating people. Without a vaccination, “herd immunity” is best known as “letting as many people as possible get sick so enough people build up a resistance.” This strategy would require over 60 percent of Americans to contract the disease and likely overwhelm the nation. (British Prime Minister Boris Johnson advocated for a “herd immunity,” strategy and is now in intensive care with the disease.)

Currently, researchers are still discovering what this disease is and how it works — we don’t yet know how much of an immunity those who have recovered from COVID-19 have built up.

Thus, Wittkowski has no idea how it specifically targets the body – if he did, he’d be holding a vaccine in his back pocket right now.

Further, people staying indoors doesn’t keep a disease “healthy,” as Wittkowski asserts when he says, “Going outdoors is what stops every respiratory disease.” The virus is the virus – if you get it in a movie theater, or on an outdoor swing set, or in your living room, you will have exactly the same symptoms and exactly the same chance of death.

What stops infectious diseases is vaccines, and what should motivate Americans is to keep infections to a minimum until those vaccines are developed.

But Wittkowski’s dangerous recommendations have begun to filter down to America’s most credulous, provoking noted epidemiologists Diamond and Silk to tweet things like:

“The only way we can become immune to the environment; we must be out in the environment. Quarantining people inside of their houses for extended periods will make people sick!”

The desire to break free of these stay-at-home orders is understandable. The economic damage being wrought on America is tremendous.

But this dangerous advice to intermingle is coming just at the same time that strong evidence social distancing is working is showing up. Daniel Tenreiro of National Review put together this valuable chart showing the curve bending downwards: 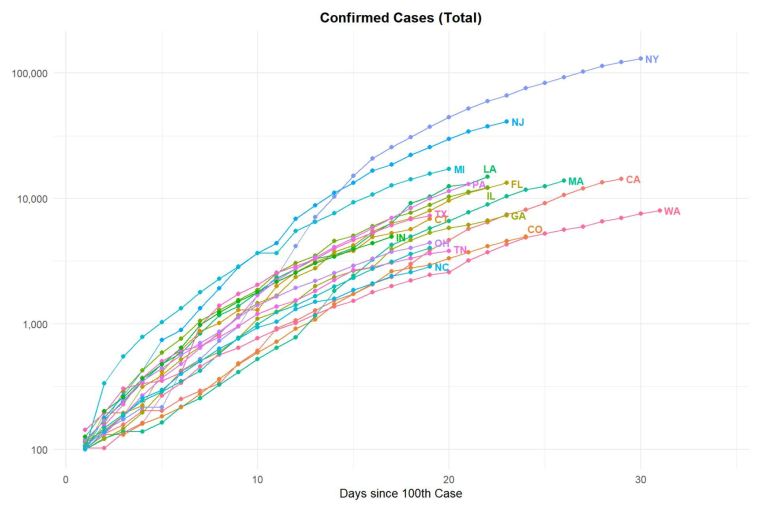 So for now, take President Donald Trump’s advice and stay inside the box where it is safe. Let’s get to work developing ways we can start opening businesses safely. This will all be over soon – just don’t jump off a cliff and flap your arms hoping the hardship will be gone tomorrow.