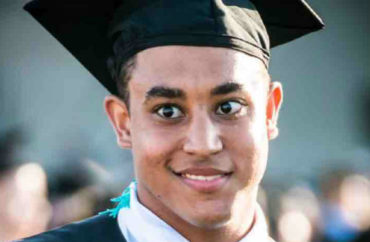 ‘Goes to the whole problem with disability issues with Title IX’

A “fist bump” and a selfie may have ended Marcus Knight’s educational career right as it started.

The student, who has autism, cerebral palsy and a shunt to relieve fluid pressure on his brain, was not allowed to defend himself against allegations in two Title IX investigations this past fall, his mother told The College Fix.

Aurora Knight has raised more than half of the money to cover legal fees through a GoFundMe campaign as she challenges the sexual-misconduct findings on her son’s record.

Though Saddleback College lifted Marcus’s suspension a day before a hearing last month, it has thus far refused to remove the findings from his record, Aurora wrote in an update to the campaign Wednesday.

Her son (below) has limited expressive language capabilities and cannot negotiate social situations as easily as others, she told The College Fix.

Though he receives academic accommodations for his disabilities, he was not offered accommodations in the Title IX process, Aurora wrote in an email. “When we look at individuals with limited social skills, we cannot expect that they responded the same way as a typical individual.”

Former Drake University trustee Thomas Rossley, whose learning-disabled son is suing the university for a similar ordeal, told The Fix in a phone interview that Marcus’s case “goes to the whole problem with disability issues with Title IX.”

“Most schools don’t even let the students know how to ask for accommodations within a disciplinary process,” said Rossley, whose own “Title IX retaliation” claims against Drake were dismissed in court last month.

“So these students don’t know that they can even get accommodations within the disciplinary process,” whether the accused student or the accusing student, he said.

Aurora Knight laid out her narrative of the allegations in a phone interview with The Fix.

The first incident occurred in the first week of September when Marcus was in the Student Services office and asked a female student working there if he could “fist bump” her. She agreed but soon filed a Title IX complaint.

The next week Aurora and Marcus were asked to meet with the school’s Disabled Students Programs and Services coordinator, who allegedly called the fist bump “inappropriate behavior.” Aurora told The Fix that Marcus did not “bump” anything other than the female’s knuckles. (The Fix has reached the coordinator but that person has not been available for a phone interview as of Thursday night.)

His mother told the coordinator that Marcus had been at the office seeking campus employment. The official allegedly said that would be “totally pointless” because Marcus was “obviously incapable” and should be taking adult disability classes instead of college classes.

Though the coordinator said the incident would not go on her son’s record if the behavior stopped, according to Aurora, the mother became aggravated by the description of a consensual fist bump as “inappropriate.”

Aurora explained to Marcus that the female student did not want to be his friend, and he agreed not to interact with her anymore.

A month later, an official who served as both vice president of student services and Title IX coordinator called the Knights into another meeting – with police present – because the female student had reported the incident as sexual harassment, according to Aurora. This official did not respond to a query from The Fix.

The student had changed her story to say Marcus hugged her, sat very close to her, grabbed her with one hand, and with the other tried to get her hands onto his upper thighs. Aurora said that did not seem physically possible, given that the female student had been sitting behind the counter. Marcus acted out what he did – a two-handed fist bump – at that meeting.

Aurora and her son were never allowed to formally defend him throughout this process, and didn’t hear back from the school between meetings except for an email from the coordinator recommending life-skills classes for Marcus, the mother told The Fix.

College staff present at the October meeting had Marcus sign an informal resolution of sexual harassment and told him not to have contact with the female student, according to Aurora.

Because of his autism, Marcus did not understand that he could not apologize to the student in person. When he approached her in the cafeteria, “everybody was pointing at him” because the female student “had been telling everybody he was weird or dangerous,” Aurora said.

Though he left the cafeteria before reaching the student, she filed another complaint against Marcus, his mother said. When Aurora complained that the student was spreading around rumors about Marcus, Aurora said an official told her in so many words that “gossiping was not against the law.”

For the first time in his life, Marcus was ordered to bring a “personal student assistant” with him to classes. Even though Aurora was paying this assistant, sometimes the person would suddenly cancel and Aurora would either have to leave work to attend class with her son or he could not go, Aurora said.

Marcus racked up too many absences to pass his English class last fall and only passed another with a D, his mother told The Fix. She said an administrator told her in the spring that he should be put on academic probation, even though his grade-point average did not merit it.

‘Manufactured issues’ that sent him to the ER

The second incident occurred in October. (Aurora was not sure whether it happened before or after the October meeting about the first incident.)

Marcus was involved with the college’s musical theater program, and wanted to ask a female student in the program if he could take a selfie with her. According to Aurora, her son’s assistant approved him asking the question, and the female student said yes.

Aurora said that her son took two “burst pictures,” which take 100 photos with each tap of the button. She provided The Fix a copy of one of the photos. It shows Marcus halfway out of the frame, with his arm extended and his hand behind the female student’s head. She’s seated and smiling.

He was touching her shoulder with the tips of his fingers, according to Aurora. “Marcus has [cerebral palsy] on his left side. When he extend his arm, his finger automatically get [sic] hard. It’s a neurologic thing,” she said. “But it was not grabbing. It’s just how he is.”

According to a charge letter dated Dec. 1, the student reported the incident as sexual harassment, claiming that Marcus “forcefully placed [his] hand on her shoulder while taking a selfie with her.” The Title IX coordinator also said the student accused Marcus of having “followed her around” in October and taking “over 300 unauthorized pictures of her.”

In a response letter, Aurora listed several “corrections” to the allegations, saying Marcus did not take pictures “of” the student but “with” and “authorized by” her, that one time. She explained the burst function on the camera and said he accidentally turned it on. His disability made it “physically impossible” to do what the student claimed, Aurora said.

The prior investigation resulted in Marcus “struggling with anxiety and depression” and spending a night in the emergency room because of stress headaches, she wrote. She called the allegations “manufactured issues.”

When the Knights were called into another meeting with the Title IX coordinator and the police, they weren’t allowed to present evidence, Aurora told The Fix. The coordinator allegedly ordered Marcus to delete the pictures on his phone, and objected to Aurora doing it for him, though she had power of attorney.

Asked by The Fix what rationale the official gave for deleting them, and whether it was put in writing, Aurora repeated that the official said to delete them. The college did not answer this factual question when asked by The Fix.

Aurora received a letter March 28 informing her that Marcus was found responsible and suspended, and she appealed days later. She told The Fix none of their evidence had been taken into consideration.

With a hearing date set for June 5, Aurora looked for pro bono representation but couldn’t find any. “I started checking for lawyers, but, you know, money. I’m a single mother and it’s not easy,” she told The Fix. With the funds raised through GoFundMe and a loan, she was able to pay a lawyer’s retainer.

Aurora said she and Marcus planned to bring 18 character witnesses to the hearing, even though she had to pay for the lawyer’s services with each. The college canceled it the day before and removed the suspension, leaving the sexual-misconduct findings in his record and requiring his assistant to accompany him on campus.

The college said it would give her an explanatory letter to alleviate the effect on his record, but Aurora said she has yet to receive it: “Marcus is now confused and scared, knowing that people do not understand him at all.”

“Due to student confidentiality requirements I’m unable to comment on this specific matter,” Jennie McCue, director of marketing and communications at Saddleback College, told The Fix when asked for the college’s side.

“However, when a complaint is filed, the college provides both the complaining and responding parties an opportunity to tell their sides of the story, and addresses the complaint according to evidence,” she wrote in an email.

The procedures for student conduct violations vary depending on the evidence and possible discipline, though the evidence standard is preponderance, McCue said.

“In general,” not commenting on any case, a “college discipline officer” will ask a student under investigation to respond to allegations, and give the student written notice if discipline is to be issued.

Rossley, whose son went through a similar Title IX proceeding, told The Fix that students like his son and Marcus need advocates in a Title IX hearing for it to be just.

“There’s also a disproportionate amount of students that have disabilities, students that are a minority (Marcus being one and my son being one), students who are foreign getting caught up in these tribunals,” Rossley said. (Marcus is half-black and Rossley’s son is Latino.)

But the former trustee thinks that the tendency of schools to not provide accommodations for students with disabilities may be changing.

Rossley pointed to a white paper issued in March 2017 by higher education insurance provider United Educators. It explained the importance of accommodating disabilities in Title IX and making the availability of accommodations clear to students involved.

NEWS FLASH ~ I’m going to front burner the launch of my “Title IX” You Tube channel. What I have learned over the past two and a half years needs to be shared with every parent and every high school and college student in America. Would you watch if it were free? pic.twitter.com/JeZd4b2gSs